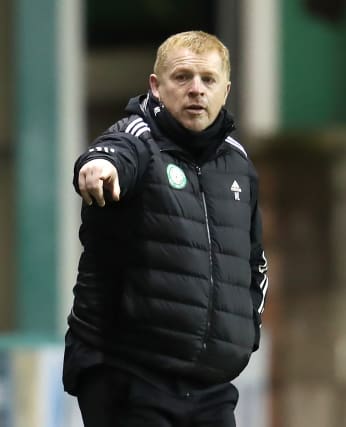 Neil Lennon insists he is the man to turn it around for Celtic after they were knocked out of the Europa League with another 4-1 defeat by Sparta Prague.

The Hoops went into the game with one point from three Group H fixtures, the last of which was a defeat by the Czech Republic side at Parkhead by the same scoreline, and with a section of the Hoops support calling for their manager to go.

Odsonne Edouard gave the Scottish champions the lead in the 15th minute but poor defending by Celtic again proved costly.

David Hancko levelled in the 27th minute and then Lukas Julis, who had scored a hat-trick in Glasgow, grabbed a double with substitute Srdan Plavsic adding a fourth in the final seconds.

Celtic have two wins in their last nine games in all competitions and are trailing Rangers by 11 points at the top of the Premiership, albeit with two games in hand.

Asked if he still backed himself to turn it around, Celtic manager Lennon said: “Of course I do. I know this group better than anybody.

“I remember at the end of last year when we lost to Rangers, everyone writing us off and we were getting slaughtered from all and sundry, be it our own supporters or everyone else in the game, saying the league was over.

“So we have been here before and we put a great run together in the second half of the season.

“It feels a little bit different, like we have a little bit more work to do but we are quite confident we will turn it around again.

“We have a lot of work to do catching up in the league but it is not beyond us, far from it.

“I have been in  situations like this as a manager and a player. There is no reason to believe we won’t turn it around.

“We’re bitterly disappointed with the run we are on but we know we have the minerals to turn it around.

“We know we have to turn it around quickly but it is something that is not going to happen overnight, but I am pretty positive.

“We are out of Europe so we have to concentrate on domestic duties now, and the league is the priority.”

Lennon believes the lifestyle changes which have taken place during the Covid-19 pandemic could be affecting his squad.

He said: “We are looking a bit disjointed as a group

“They are an excellent group. I think they are lacking a bit of unity at the minute

“I don’t know if it is because we’re living through a pandemic and it is not normal. There are things that are maybe out of their control.

“I think they’re missing the atmosphere in the stadiums as well. We have to try and remedy that, adapt to it.

“I don’t think it is a major football issue, I think it is more psychological than anything else.”