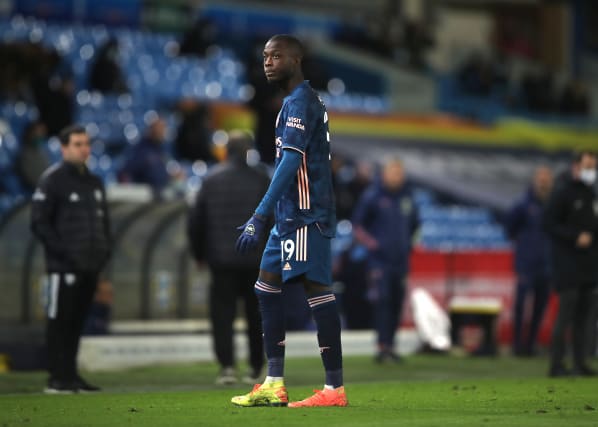 Mikel Arteta was delighted to see Nicolas Pepe’s positive reaction to his criticism as the winger opened the scoring in Arsenal’s Europa League victory in Molde.

Pepe was sent off in Sunday’s draw at Leeds and Arteta said afterwards that he had let down his team-mates – but the club-record signing responded as Arsenal eased to a 3-0 win to qualify for the knockout stages.

The result means Arsenal are through to the round of 32 and can assure themselves top spot in Group B with a positive result at home to Rapid Vienna next week – a game which will see 2,000 supporters return to the Emirates Stadium for the first time in nine months.

Pepe impressed having been retained in the starting line-up and had a number of chances, including a fine strike off the crossbar, before putting the Gunners ahead with an accomplished finish.

Folarin Balogun wrapped up the win with his first Arsenal goal, just 37 seconds after coming off the bench, with Reiss Nelson having earlier doubled the lead.

But it was the performance of Pepe which left Arteta smiling after the game.

“I am really pleased,” he said of the 25-year-old’s reaction.

“Obviously after the disappointment, something negative, you want to see a reaction and to stand out really quickly.

“I could see from the first minute, from his body language, that he was ready to act. I think he had a great performance.

“He scored a goal, he could have scored another one or two. He created some great moments in the game and worked really hard for the team. I really liked it. I am really pleased with that.”

Pepe has struggled for consistency since joining from Lille for £72million in 2019 but now has three goals in four Europa League games this season.

Arteta has now called on Pepe to maintain such standards moving forward.

“We all know where his level is and all the time the question is how often he can get to that level – and how he contributes to other aspects of the game,” he added.

“Today is the example. That should be the level that he needs to hit and from there he needs to keep improving.

“He is capable of doing it and you can see that every time he gets in those positions, in the final third, he is a real threat and a really difficult player to control.

“He can come with his feet, he can go inside, outside, he can shoot and create crosses. He can go in behind you as well. That’s what we expect from him.”

Pepe will be banned for Sunday’s visit of Wolves, with Nelson pushing to replace him in the side and make his first Premier League start of the campaign.

“He has made some big steps in the last month or so,” Arteta said of the England Under-21 international.

“He is showing what he can do. He is another player that wants to take you on all the time, he is very vertical, he is great at running in behind and is very unpredictable.

“I like these types of players to play in winger positions. Defensively there are things he needs to do better and he will improve that, but he is a much more mature player.

“He showed a great attitude in my opinion to say he did not want to leave on loan because he believes that he has a chance to play for his club.

“He is showing that he wants to take that direction and he is performing the right way.”