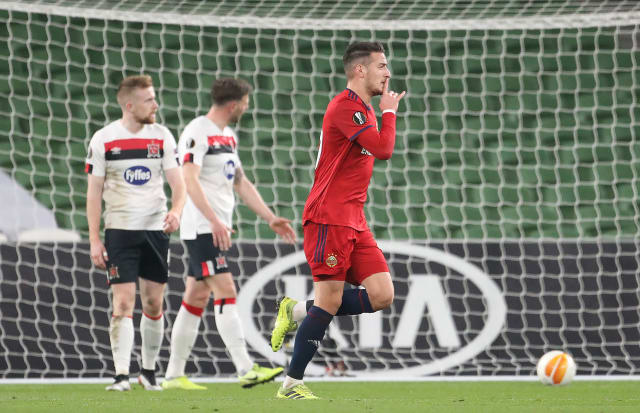 Dundalk remain without a point in the Europa League following a 3-1 home defeat to Rapid Vienna.

Christoph Knasmullner and Ercan Kara powered Rapid into a 2-0 half-time lead but the hosts had a good chance to reduce the deficit only for Nathan Oduwa to miss his penalty.

Kara then added his second before Chris Shields make it 3-1 from another penalty in the 63rd minute, although it was not enough to deny the Austrian side.

Knasmullner put Rapid ahead with a powerful 30-yard strike in the 11th minute, before Kara struck his first goal of the game.

Oduwa had a chance to drag Dundalk back in the game early in the second half after his side were awarded a penalty, but his spot-kick went wide of the target.

Just before the hour-mark, Kara curled the ball past Gary Rogers to give the visitors a three-goal lead.

With their second penalty of the match, Shields did pull one back for Dundalk with a shot into the top corner, but it proved just a consolation for the Irish side.

The result leaves Dundalk bottom of Arsenal’s Group B without a point from their first four matches.