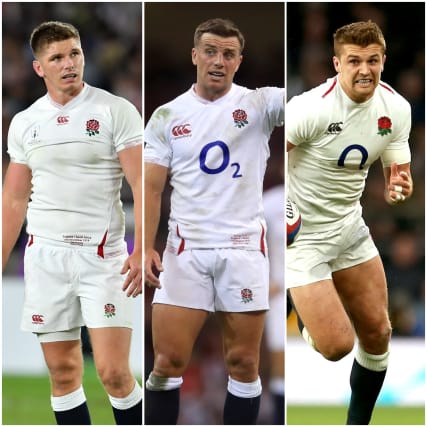 Eddie Jones has packed his midfield with ringmasters but England’s head coach has warned Wales they will not be arriving at Parc y Scarlets in dinner suits.

George Ford has been reinstated at fly-half after making his comeback from an Achilles injury as a replacement in a 18-7 victory over Ireland last Saturday that has placed the Autumn Nations Cup final within touching distance.

To accommodate his return, Owen Farrell and Henry Slade join forces in the centres for the first time since the 2018 tour to South Africa.

Ollie Lawrence had brought ball-carrying prowess to the number 13 jersey until he was ruled out against Wales by a hip problem and in rejigging his midfield, Jones has deviated from comments made only a month ago.

As England were preparing for their Six Nations-clinching match against Italy, their head coach declared that rush defences had transformed centres into NFL-style running backs with the objective of punching holes in the defence.

Yet against Wales he has filled the 10-12-13 axis with players of vision and finesse rather than raw power.

“There’s a better man than me who said contradiction is normal. It is. We keep changing. We keep evolving. We keep looking to see how we can get better,” Jones said.

“Our big running centre at the moment, Ollie Lawrence, is not available for this game. We have rested him. He does not have the physical fitness to play this game so we look for other solutions.

“None of Ford, Farrell, Slade play in dinner suits. They all run and get tackled. The whole word playmaker suggests they make plays. They have got to run, they have to kick, they have to tackle.”

Creating headlines in Wales’ team is the selection of flanker James Botham, the 22-year-old grandson of England cricket great Sir Ian Botham who will be winning his second cap as a flanker.

“It’s a great sporting family, isn’t it? His grandson playing for Wales, I’m sure he will bring a lot of pride to the family and I just hope he’s not as good an all-rounder as his grandfather is,” said Jones, a keen cricket fan.

“His grandfather was an incredible cricketer, probably one of the best cricketers I have seen because of his ability to turn a match. Certainly the boy playing on Saturday has got good genes.”

England bullied Andy Farrell’s Ireland with one of their greatest defensive displays, but Jones admits they faded in the final quarter to expose a vulnerability in a team that he says is a work in progress.

“We were on it for maybe 60 minutes of the Ireland game but not for 80 minutes,” Jones.

“We are not a team that is humming along and is like a big V8 that is revving down the highway. We are always trying to fix those problems.”

Jones believes Wales will be galvanised by the troubles facing their head coach Wayne Pivac, who until Georgia were beaten last weekend was under pressure having presided over a run of six Test defeats.

“Wales have been sitting around all week with people talking about England and the challenge we will bring,” he said.

“They have been prodded and been told their coach is under pressure. There will be a lot of desire and intent.

“Wayne Pivac is a good young man and he deserves some time to be a good coach for Wales and he will be.

“But at the moment, when he sees a board member, they turn the other way and it becomes difficult.

“You start looking for shadows in the corners and start seeing meetings between people. It’s a tough time. Hopefully he gets some time.”