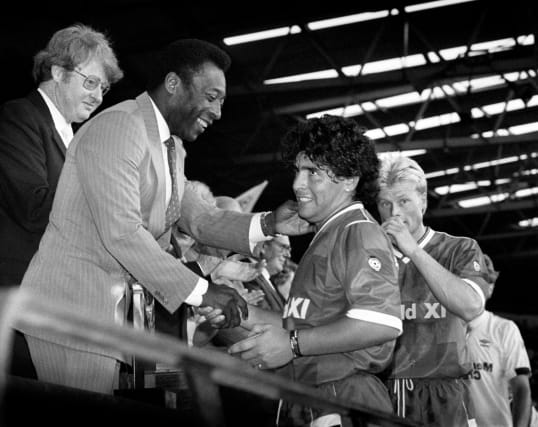 Pele paid tribute to his fellow all-time great Diego Maradona after the Argentinian's death at the age of 60, saying: "One day, I hope we can play football together in the sky."

The Brazilian three-time World Cup winner was often Maradona's closest competitor in polls to decide the greatest footballer of all time.

And the 80-year-old issued fulsome praise for his fellow South American, writing on his official Twitter account: "What sad news. I lost a great friend and the world lost a legend.

"There is still much to be said, but for now, may God give strength to family members. One day, I hope we can play football together in the sky."

Maradona's death was confirmed by Argentina's football association. He had been in hospital in Buenos Aires after surgery to remove a blood clot on the brain earlier this month.

Argentina eliminated England from the 1986 finals at the quarter-final stage, as Maradona scored twice. The first was a blatant handball – 'the Hand of God as Maradona described it – and the second a stunning solo effort.

Gary Lineker, who was playing for England that day, tweeted: "By some distance the best player of my generation and arguably the greatest of all time.

"After a blessed but troubled life, hopefully he'll finally find some comfort in the hands of God. #RipDiego"

Boca Juniors, where Maradona made his name before securing a then world-record transfer to Barcelona in 1982, tweeted: "Eternal thanks. Eternal Diego."

"He always seemed indestructible. I had 10 hours with the man!! I touched his left foot. We did our best to show the world the man, the myth, the fighter he was. The greatest."