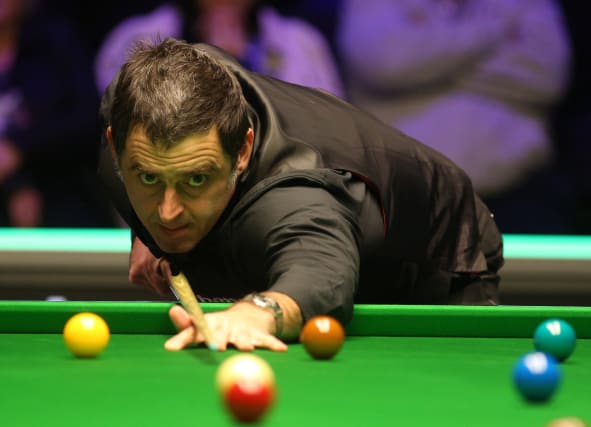 Seven-time winner Ronnie O’Sullivan coasted into the second round of the UK Championship with a 6-0 thrashing of amateur Leo Fernandez in Milton Keynes.

O’Sullivan chalked up three half-century breaks and a clearance of 121 in a near faultless display at the Marshall Arena.

Fernandez had threatened to halt the whitewash with opportunities in both the fifth and six frames.

However, the veteran Irishman could not build enough momentum and missed crucial chances when on the colours in the sixth which allowed O’Sullivan back to the table, where he soon wrapped up victory.

The Rocket, beaten in the Northern Ireland final by Judd Trump on Sunday, will next play either Alexander Ursenbacher or Nigel Bond.

Earlier on Wednesday, Jimmy White socked it to fellow veteran Alan McManus as he marked his 100th match in the UK Championship with victory.

The 58-year-old revealed he has run out of underwear during his stay at the on-site hotel, but it did not stop him cleaning up with a 66 break to seal a 6-4 win and a place in round two.

White admitted: “Socks, underwear, shirts – I’ve run out of everything. I just need to get out of here, get home and regroup before I come back for my next match.”

White, who reached the semi-finals on his first main-draw appearance in 1981 and won it in 1992, admitted he was aware of the milestone but could share few recollections of his early years in the event.

“You can forget all of the eighties, and (I remember) a tiny little bit of the nineties,” joked White.

“I heard it was my 100th match and it really spurred me on out there. To come up with that clearance at the end was really pleasing, and it gives me a lot of confidence going into my next match.”

Stuart Bingham, meanwhile, compiled the second maximum break in as many days in the sixth frame of his first-round win over Zak Surety.

It followed less than 24 hours after Kyren Wilson’s 147 against Ashley Hugill.

Wilson cheekily responded on Twitter: “Cheers @Stuart__Bingham – had to take my limelight didn’t you – Race to 2 Max’s take the pot” – an offer which his rival keenly took up.

Bingham said: “In practice in the last couple of days I’ve been close a few times, but I felt something was in the air even before the first red.

“With no crowds, it just feels a bit more like a practice session, and that’s maybe why you’re getting a few more.”