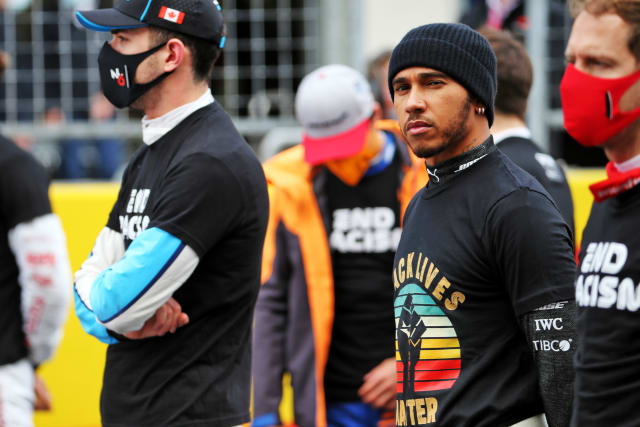 Lewis Hamilton has been praised for “throwing down a gauntlet” to Formula One bosses to act on countries the sport races in with poor human rights records.

After clinching his seventh world championship in Turkey earlier this month, Hamilton hinted that his future hinges on the sport cleaning up its act.

The Englishman, who is out of contract with Mercedes in five weeks, said: “I would love to stay, but we realise we have got to face, and not ignore, the human-rights issues in the countries that we go to — not just 20 or 30 years from now, but now. I want to help Mercedes and F1 on that journey.”

It is understood that there has not been any dialogue between Hamilton and F1 chiefs on this topic.

Hamilton’s record-equalling title parade begins in Bahrain on Sunday with two races to be staged on consecutive weekends in the Gulf Kingdom.

F1 has visited Bahrain since 2004, but the race was cancelled in 2011 following a series of anti-government protests.

Hamilton, FIA president Jean Todt, and Stefano Domenicali, who is replacing Carey next year, are also copied in on the letter.

“Each year, Bahrain has sought to sportswash its image with the glamour of a grand prix, but the grubby reality in Bahrain is of a country where repression is systematic and far-reaching.

“While the impressive Bahrain International Circuit has become an F1 fixture, outside the race track the country remains a deeply repressive place where anyone critical of the government can be jailed merely for posting a tweet.

“Bahrain’s autocratic rulers may see back-to-back grands prix as another opportunity to sportswash the country’s heavily-tarnished image, but Lewis Hamilton and others are rightly beginning to call countries like Bahrain out over their shocking human rights records.”

F1 recently announced a deal to race in Saudi Arabia for the next 10 years, starting from 2021. In the past, the sport has faced criticism for staging rounds in China, Russia, Azerbaijan, and Abu Dhabi — the latter will host this season’s finale on December 13 following the Bahrain doubleheader.

An F1 spokesperson said: “We have always been clear with all race promoters and governments with which we deal worldwide that we take violence, abuse of human rights and repression very seriously.

“Our human rights policy is very clear and states that the Formula One companies are committed to respecting internationally recognised human rights in its operations globally and have made our position on human rights clear to all our partners and host countries who commit to respect human rights in the way their events are hosted and delivered.”