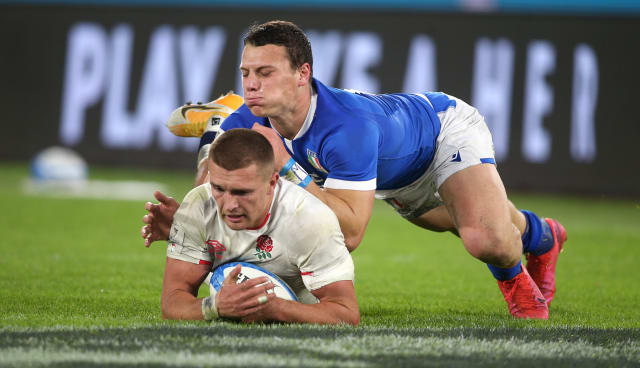 England centre Henry Slade is determined to continue piling up the silverware by adding the Autumn Nations Cup to the titles collected last month.

Exeter won the Champions Cup and Gallagher Premiership on successive weekends and no sooner had the double been completed than Slade was helping Eddie Jones’ men claim the 2020 Six Nations in Rome.

The coronavirus pandemic meant the rearranged finals and climax to the Championship had to be staged in a small window, while also creating another opportunity to lift a trophy.

The Autumn Nations Cup has replaced the traditional end-of-year-tours by the southern hemisphere giants and following comfortable victories over Georgia and Ireland, only Wales stand between England and a place in the final on December 6.

“It’s been a pretty awesome year. I can’t really ask for much more, although it could have been a bit better with people there to watch it,” Slade said.

“Apart from that, it has been an unbelievable season and we’ve got the chance in the next couple of weeks to get another piece of silverware and we are working really hard to do. If we can do that, it’ll be awesome.

“It’s pretty strange circumstances really. It’ll never happen again when you have the finals all back to back and then the Six Nations in October.

“For us to have done that was awesome – three on the bounce is something I will probably never get to do again and something that I will cherish forever.”

While England have brushed side all obstacles so far this autumn, frustrations remain over an attack that has yet to ignite.

Even a resounding 18-7 victory over Ireland – among the finest performances of the Jones era – was built on a brutal defensive display with Jonny May’s two tries the result of individual brilliance.

An over-reliance on kicking has drawn criticism, as have examples of where players have not reacted to opportunities in front of them. Slade insists they are ready to come alive – if the circumstances are right.

“It would be nice to show our attacking hand. In training it’s been going really well, there have been some different combinations and some great attacking structure,” Slade said.

“Maybe something people weren’t aware of is that in the Georgia game it was proper wet. The weather was horrible and playing lots of rugby in that game would have been a bit silly.

“Our kicking game and our defence is really strong, so that was where the wining of that game was – and the set piece with the forwards.

“Against Ireland, we just didn’t have much ball. They attacked well and held on to the ball, but I thought we defended unbelievably.

“Some of the tackles from the forwards were absolutely insane. It’s awesome to play with and see Sam Underhill and Tom Curry absolutely smashing them every time a team carries.

“And then there was Maro Itoje getting up in their face and Ellis Genge coming off the bench and writing people off.

“We can’t control the weather. If it does start chucking it down we can’t expect to be running from our 22.

“If conditions allow and the game dictates that is the best option then we definitely want to be doing it, but we’re not going to be doing it for the sake of it, only if it is the right thing to do.”