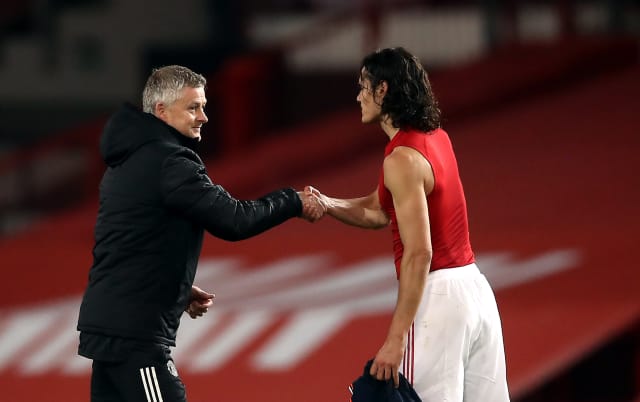 Manchester United manager Ole Gunnar Solskjaer is not taking Champions League progress for granted despite taking a giant step towards the last-16 with victory against Istanbul Basaksehir.

Having opened Group H with stunning victories against Paris St Germain and RB Leipzig, defeat to the Turkish champions at the start of November threatened to derail the Red Devils’ Group H campaign.

But United got back on track at an empty Old Trafford on Tuesday evening, with Bruno Fernandes’ brace added to by Marcus Rashford’s penalty and a late goal from substitute Daniel James.

The 4-1 triumph means Solskjaer’s side only need a point from their final two matches to qualify for the last 16, but next week’s home match against PSG and the trip to Leipzig have ensured the manager is not getting ahead of himself.

“The group is still very open,” the Norwegian said.

“We’ve got nine, two on six points (PSG and RB Leipzig) and Basaksehir on three, so we still need points to go through.

“One probably should be enough and three probably gives you the win, so hopefully against PSG we can secure the points we need but that’s another matter.

“Edinson (Cavani on his first start) and Donny (van de Beek) did really well, both of them.

“Of course I thought the whole team played really well. We found our positions and the tempo with the ball was really good.

“We deserved the win, of course, after that first half. Second half is always different and more difficult to keep the tempo when you’re winning 3-0.”

Fernandes’ stunner seven minutes into the match was comfortably the highlight of the clash.

Asked if he ever gets surprised by the Portuguese’s contribution, Solskjaer said: “Not really, no.

“Of course we see him every day in training. We knew what we were going to get when we got Bruno to the team. He’s a player who likes to take risks. He likes to create chances, he likes to score goals.

Fernandes added to his thumping opener after Basaksehir goalkeeper Mert Gunok flapped at a cross and the Portuguese looked set to have the chance to wrap up a first-half hat-trick.

But United’s regular penalty taker – who fired home the spot-kick that saw off West Brom on Saturday – selflessly gave the ball to Rashford to score from 12 yards.

“Of course, every player wants to score a hat-trick, you know?” Fernandes told BT Sport.

“But after the game (against West Brom) in the Premier League I told Rashy he will take the next one. I remembered that.

“Also Rashy is one of the top scorers in the Champions League so I think it will be important for him to keep going there and taking that confidence.

“As I say, it doesn’t matter who takes the penalties, the most important (thing) is scoring. When the team scores, I score too.”