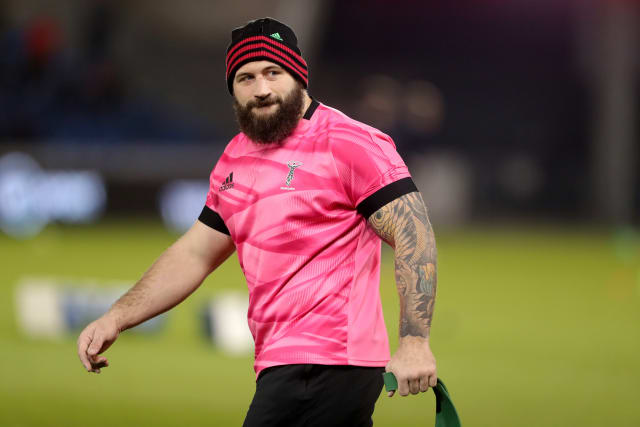 Joe Marler is in contention to make his Test comeback against Wales on Saturday in what would be his first England appearance since grabbing Alun Wyn Jones’ testicles.

Marler has yet to play this autumn because of a troublesome knee injury but the colourful Harlequins prop has been retained in a 25-man squad that will continue preparations for the Parc y Scarlets showdown.

Eddie Jones must choose between Marler, Mako Vunipola and Ellis Genge for the two loosehead slots when he names his team on Thursday morning, with defence coach John Mitchell insisting past history in the fixture will be ignored.

Eight months ago the 30-year-old caused outrage when he groped Jones’ groin in a 33-30 victory at Twickenham, resulting in a 10-week ban.

The timing of the coronavirus pandemic meant he did not miss a single game and now his first opportunity to reclaim the England number one jersey is against Wales in the final match of the Autumn Nations Cup group phase.

“I wouldn’t say it influences selection. But the great thing about this game is you always have memories!” Mitchell said.

A player who will definitely be missing against Wales is Ollie Lawrence after the powerful Worcester centre was ruled out by a hip injury.

The 21-year completed his debut in the Six Nations title-clinching win against Italy at the start of the autumn and then started against Georgia and Ireland, showing evidence of his ball-carrying prowess against the latter.

In the injury-enforced absence of Manu Tuilagi, England have been looking to Lawrence to make hard yards in midfield where he has shown raw potential.

“Ollie has a little niggle around his abductor and hip area, nothing major but it is a niggle that is concerning him,” Mitchell said.

“Ollie has huge potential as a centre. He is very talented in terms of running onto the ball and he has got exceptional ability to line-break.

“What he’s learning are the nuances which are required at this level, which is things like your effort and ability to stay alive in all situations and your effort off the ball, post-defensively.

“Like anything, you don’t expect a young international to pick up all of that immediately. It is more about getting competence and learning along the way through experiences.”

Among the 10 backs remaining in camp is Anthony Watson, who has recovered from an ankle injury sustained in the rearranged match against Italy.

Watson could be immediately restored to the right wing, thereby ending the experiment of playing Jonathan Joseph out wide, while George Ford is likely to profit from Lawrence’s injury by being reinstated at fly-half with Owen Farrell and Henry Slade forming the centres.

Jones has given himself more options up front by keeping 15 forwards in Teddington, among them Luke Cowan-Dickie who will make his first appearance of the autumn after being preferred to Tom Dunn as hooker cover for Jamie George.

Jack Willis makes the cut after losing out against Ireland and is pushing hard to win his second cap, having impressed on his debut when the Autumn Nations Cup opened against Georgia.

Saturday’s renewal of the cross-border rivalry will take place behind closed doors but even in the absence of the supporter-generated hostility that traditionally awaits England on Welsh soil, Mitchell still expects provocation.

“They’ll have a way to try and distract and disrupt us and we look forward to that,” Mitchell said.

“They have always had a crack at Ben Youngs and at Owen Farrell. I think they went hard at Kyle Sinckler a couple of times we’ve been down there. They clearly target people.

“They look to create individual distractions and then try to take away some of the key components to our ways of creating pressure.

“We’re ready for anything and we expect that again. That’s just the way they play. I wouldn’t say they’re dirty tricks. It’s just clever, smart ways of trying to take something away from a side.

“Ultimately a better way to sum it up is that they try to make you uncomfortable, which is what we try to do to them as well.”