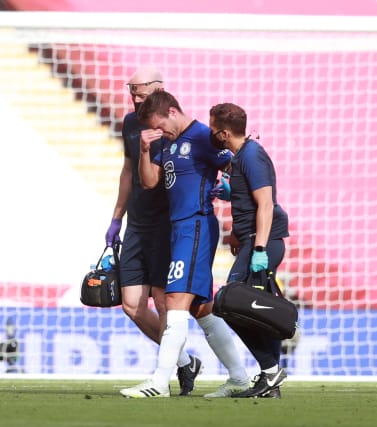 The brain injury charity has welcomed the plans as a positive step but Griggs does not believe they go far enough.

Concussion substitutes will be trialled in the FA Cup third round and women’s FA Cup if the plan is given the go ahead.

It will allow teams to make an extra permanent substitution when a player is suspected to have a concussion.

Football’s lawmakers, the International Football Association Board, said its football and technical advisory panels had recommended the trial and that a final decision will be made at IFAB’s annual business meeting on December 16.

The FA and Premier League were both in favour of an additional permanent substitute and continuing with the current three-minute assessment period for players suspected of suffering a concussion, but Griggs remains wary.

He told the PA news agency: “There seems to be some flawed logic with the concept they are going to be permanent substitutes instead of temporary.

“How are you going to assess the players if you are still sticking with the three-minute window on-pitch assessment? That is not going to be able to identify if a player needs to be permanently substituted.

“You still have the very same problem. They are changing everything but changing nothing because you still have to make the decision who needs to be taken off the pitch.

“What the temporary assessment would do is it would allow you longer, a 10-minute assessment off the pitch and allow you to make a more considered assessment. It’s not perfect but it’s better than doing an on-pitch one for three minutes.

“We have been campaigning for so long and we will see it as a victory. We would warmly welcome a trial and do think it’ll be significant step forward, albeit it’s not a big enough step.”

World players’ union FIFPRO has also called for the introduction of a 10-minute assessment period.

It comes after a renewed focus on the debate around whether there is a link between concussion management and an increased risk of dementia to players.

The Professional Footballers’ Association is setting up a new taskforce to further examine the issue of brain injury diseases in football.

Sir Bobby Charlton was diagnosed with dementia at the start of the month while fellow World Cup winner Nobby Styles died in October, aged 78, after suffering from dementia and prostate cancer.

Griggs, who insisted Headway remains open to discussions with the FA, added: “Headway has been campaigning on this issue for several years, from the time of the Romelu Lukaku and Hugo Lloris incident (in 2013).

“We were very clear then about the lack of concussion protocols and the welfare of the players. You had a player on the sidelines in Lloris who lost consciousness, who was unsteady on his feet and he overruled the medical staff.

“He was allowed to go back on the pitch and was labelled a hero for doing so.

“We have been calling for changes ever since. There have been changes but in terms of speed of change it has been woeful compared to other sports.

“It’s been hard to understand why it has taken so long to get to this point. Rugby has been on this journey and has established working protocols which could be borrowed and adapted for football.

“The question has to be why they did not change the rules to prevent against a brain injury which is more serious and has more long-term implications than a pulled hamstring.”