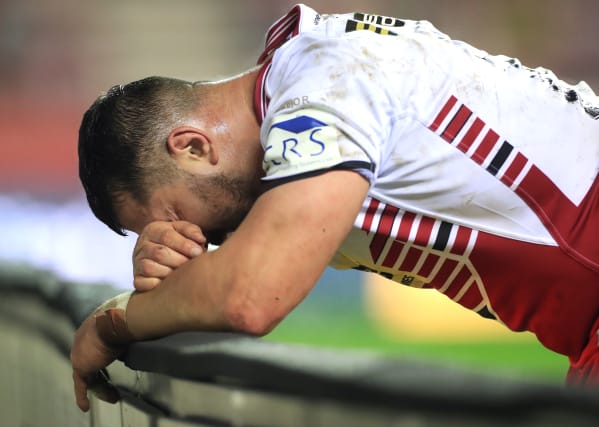 The veteran front-rower, who is out of contract and set to leave the club, hobbled off 56 minutes into his side’s 29-2 semi-final win over Hull last Thursday and coach Adrian Lam has confirmed he has failed to recover from the leg injury.

It continues his unhappy relationship with the Grand Final after he was sent off two minutes into the 2014 showpiece for repeatedly punching St Helens’ Lance Hohaia.

The absence of Flower, who had been poised to join Toronto until they failed to win their place back in Super League, could open the door for England international George Burgess to end his first season with Wigan on a high note.

“He’ll (Burgess) be in our 21 and we’ll finalise our squad after the captain’s run,” Lam told a Grand Final press conference on Zoom.

Lam confirmed that hooker Sam Powell will return after sitting out the last match for personal reasons, insisting he is an automatic selection in his team.

“It’s not a conundrum, he’ll play,” he said. “He’s been the heartbeat of our team and he’s one of the best nines in the competition.”

With Jackson Hastings set to revert from hooker to stand-off, youngster Harry Smith will be battling with Burgess for a place on the Wigan bench.

St Helens coach Kristian Woolf confirmed at the press conference that prop Alex Walmsley has recovered from a knee injury sustained in Friday’s 48-2 semi-final win over Catalans Dragons and is confident fellow front-rower James Graham will be fit enough to end his career in the title decider.

Graham, who is hanging up his boots after a 17-year career, was taken off with a head knock in the early stages of the last match and has yet to be formally passed fit.

“James Graham will be fine,” Woolf said. “Obviously he’s got a seven-day protocol to go through and has to tick boxes each day.

“The doc will have the final say but we’re very sure he’ll be right to play.”

Woolf says victory on Friday would provide a fitting way for Graham to bow out.

“He’s a bloke who gives you absolutely everything in terms of passion and effort, there is no better example for any young forward than James Graham.

“He’d like to make it very much not about himself but we’d love to send him out on a positive.”

Wigan captain Sean O’Loughlin is also bringing the curtain down on his career at the KCOM Stadium and Lam says his players will be aiming to send him out on a high.

“It’s important we play well for him,” he said. “You want to send off your heroes in a positive way.

“Sean sets the bar high, he’s a great leader here and we’re going to miss him.”