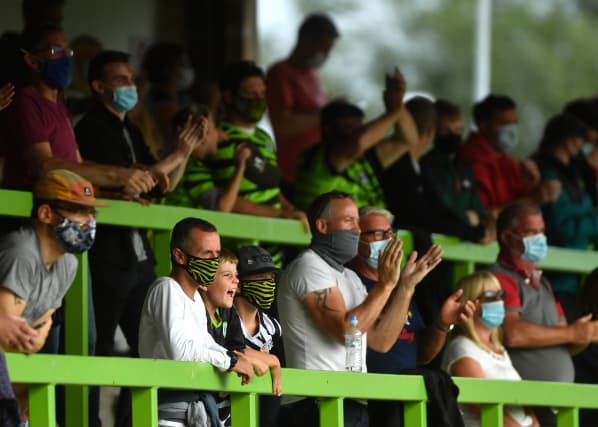 Football and rugby bosses welcomed the Government’s decision to allow a limited number of spectators back into venues in lower-risk areas when the second national lockdown ends next week.

Prime Minister Boris Johnson has outlined plans for a return to a regionalised tier system from December 2 to combat the spread of coronavirus.

Outdoor venues in tier one areas – those considered lowest risk – will be permitted to admit up to 4,000 spectators to an event or allow 50 per cent capacity, whichever is lower.

The English Football League, whose clubs have been hit hard by the loss of matchday revenue since March, led the way in welcoming the decision.

“Whilst today’s news is subject to regional restrictions, it is an important step in achieving a return to normal, alongside it being crucial to addressing the significant revenue gap left by a lack of spectators and other revenue streams as a result of the pandemic,” a statement from the league read.

Clarity is expected over which areas will be placed into the respective tiers on Thursday.

Spectators had been set to return to sports venues on a limited, socially distanced basis from October 1, with venues preparing to go as high as one-third of full capacity.

However, a rise in coronavirus infections led the Government to pause those plans, with hopes receding still further when the country entered a second national lockdown earlier this month amid fears the NHS could be overwhelmed by Covid-19 cases.

Venues in the highest-risk tier-three areas will still not be allowed to permit spectators, the Department for Digital, Culture, Media and Sport (DCMS) said.

Despite that, Premiership Rugby chief executive Darren Childs joined the EFL in viewing the news as a positive step in the right direction.

His organisation is set to receive £59million in Government support to cover matchday losses as part of the Winter Survival Package for sports.

“Our clubs have proved that when it is safe to do so they can bring fans back safely, with very successful pilot events at Harlequins and Gloucester Rugby,” Childs said.

“We won’t know the exact impact on our clubs until the tiers are announced on Thursday, so my team stands ready to work with Government to tackle the challenges of fan attendance in a way that minimises health risks.”

The Premier League has been approached for comment. In September, it said that the capacity limit of 1,000 in place at that time for pilot events did not allow its clubs to properly evaluate fan safety measures and that the matches would be “heavily loss-making”.

The DCMS has also confirmed plans for grassroots sports to return.

In tier one, indoor sports can take place adhering to the rule of six, which would allow for three-on-three volleyball or doubles tennis, for example.

Group activities such as training sessions and exercise classes can take place in larger numbers, provided that people are in separate groups of no more than six, and do not mix.

In tier two, indoor sports can be done within household groups, or in larger organised groups like exercise classes as long as there is no mixing between households.

Sports which do not involve close proximity or physical contact against one person from another household, such as a singles tennis match or badminton match, will also be permitted.

In tier three, indoor sport will be restricted to within your household only, and there should be no group activity such as exercise classes.

The Football Association welcomed both announcements, saying in a statement: “We are very pleased that organised sports, which include Steps 3-6 of the National League System [NLS], Tiers 3-6 of the Women’s Football Pyramid [WFP] and competitive grassroots football, can look forward to resuming from December 2.

“We are also delighted to see the beginning of the safe return of fans in stadiums for elite sports events and confirmation that spectators at non-elite sports will be able to attend events in line with Covid-secure guidance for each tier.

“We will continue our ongoing dialogue with Government to clarify the details and next steps, and provide further updates in due course.”

Culture Secretary Oliver Dowden said: “This is a big step forward for sport. Bringing grassroots sport back was my number one priority so I’m pleased we are reopening sports and gyms in every tier, in recognition of the significant health benefits.

“I’m also delighted we are able to get the turnstiles turning  sooner than expected, taking a cautious approach and starting with the lowest risk areas first. I’m confident that sports will take every step to ensure their fans are safe, and fans will play their part and look out for each other until we can safely get everyone back in.”

Fans will also be able to attend non-elite sports events in line with relevant guidance for each tier.