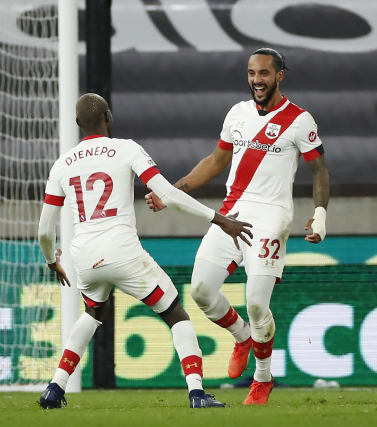 The 31-year-old, on loan from Everton, netted for the visitors for the first time since January 2006 to earn a 1-1 draw at Wolves.

Pedro Neto’s equaliser claimed a point for the hosts after Walcott missed a fine chance to make it 2-0.

Walcott returned to St Mary’s for the season in October, having left for Arsenal in January 2006, and Hasenhuttl knows he cares about the Saints.

“I’m happy to work with Theo, he definitely showed it means something to him to play for this club,” he said, with Southampton fifth in the Premier League. “You can feel how much he invests working for the team.

“It was good to see how quickly he has adapted to our game, although he can be more clinical. It’s important, we must be a team who can play without these players (the injured Danny Ings).

“We did our maximum with the squad we have. I feel tired. I’m very proud of my team because taking something was not easy. It was like chess, both managers found solutions to cause the other one problems.

“In the end they had another gear to go so it was a tough fight. We had the match point with Theo’s second chance.”

Southampton extended their unbeaten run to seven games and were slicker in the first half, with Walcott denied by Rui Patricio and Stuart Armstrong sliding their best chance wide after 31 minutes.

But Alex McCarthy saved well from Nelson Semedo, Leander Dendoncker and Daniel Podence before the break.

McCarthy thwarted Podence again soon after the restart, beating away the forward’s drive after he was sent clear, before Walcott opened the scoring after 58 minutes.

Che Adams was allowed two chances to cross and, when Semedo switched off at the far post, Walcott stole ahead to tap in – although Wolves were unhappy Armstrong was not penalised for a foul on Rayan Ait-Nouri in the build-up.

It was his first goal since netting against MK Dons in the FA Cup before a move to Arsenal as a 16-year-old. The forward then wasted a fine chance to make it 2-0 when he dragged wide and it proved costly.

Raul Jimenez had been quiet but he came alive with 15 minutes left, hitting the post from 18 yards and Neto gobbled up the rebound.

Jimenez had a header rightly ruled out for offside and McCarthy saved well from Neto as Wolves failed to find a winner.

They climb to ninth, three points behind the Saints, but Nuno Espirito Santo felt referee Andre Marriner missed the foul on Ait-Nouri.

He said: “Yes, yes, I didn’t see the image clear but the perception I have from the pitch, I have a clear sensation there was a foul.

“It was a good game, a very intense game with a high tempo. Southampton are a good team.

“We had some good spells of possession and we finished the game very strongly, on the front foot, pressing and creating huge problems for Southampton and having good chances.”

It was also the first league game since September 2017 which Conor Coady did not start, due to coronavirus rules, with the captain self-isolating after pulling out of the England squad having come into contact with someone with Covid-19.

“The protocols make it very hard for everyone, for all the teams,” Nuno added.

“It’s been many games with the same lines (formation) but the adaptation was very good. We have a good foundation which allows us to grow our game.”