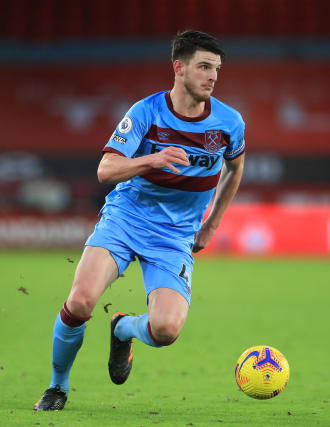 West Ham boss David Moyes does not want his team to become too reliant on Declan Rice.

The 21-year-old midfielder, a reported target for London rivals Chelsea during the last transfer window, has taken his game to a new level this season.

Handed the captain’s armband by Moyes in the absence of Mark Noble, Rice has been pivotal to the Hammers’ impressive start to the campaign and he excelled once more in Sunday’s 1-0 win at Sheffield United.

“He is such an improved player,” said Moyes. “I really think he is doing a great job as a player and we are building up hope that he will be an outstanding captain.

“The role, his responsibility he takes on the pitch because of his young age, his leadership qualities will build. He has learned from Harry Kane and Mark Noble.

“My biggest concern – and I know he is young – would be that I don’t want us to rely too heavily on him.”

Fresh from scoring his first goal for England against Iceland just a few days before, Rice’s work in the middle of the park at Bramall Lane was again complemented by Tomas Soucek.

The Czech midfielder, who made his loan move from Slavia Prague permanent over the summer, has also not gone unnoticed by Moyes.

“While Declan gets many of the plaudits, you would have to say that Tomas Soucek as well is doing a great job,” said the Hammers boss.

“Sometimes maybe being British we look at the players who are doing well here, but Tomas Soucek has done a brilliant job alongside him.”

Sheffield United boss Chris Wilder insists his players are not doing too much wrong, despite their disappointing start to the season.

The Blades remain rooted to the bottom of the Premier League table with only one point from their nine matches.

“He (Moyes) has just said, ‘Don’t look at it too tactically, too deeply, the players are giving you everything’.

“The conversation with David gives me a lot of belief in what we’re doing, that we’re not a million miles off.

“The team is together, they’re having a go. The Premier League is cutthroat and we’re just falling a little short at the moment. We are just lacking a little bit of quality that comes with belief and confidence.”