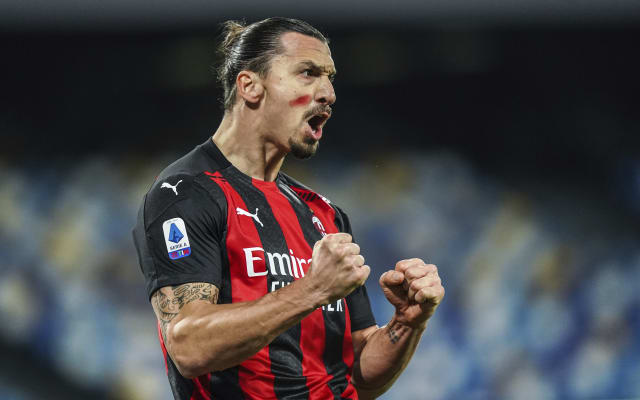 Zlatan Ibrahimovic scored twice as AC Milan remained top of Serie A with a 3-1 win at Napoli.

Ibrahimovic powered Milan into a 2-0 lead with goals in the 20th and 54th minutes of the match.

Dries Mertens got one back just after the hour but Tiemoue Bakayoko saw red moments later to slow the fightback, and Jens Petter Hauge’s late goal sealed the points.

Second-placed Sassuolo had earlier won 2-0 away to Hellas Verona with goals in either half from Jeremie Boga and Domenico Berardi, keeping them two points behind.

Romelu Lukaku scored twice as Inter Milan came from 2-0 down to beat Torino 4-2.

Simone Zaza put the visitors in front on the stroke of half-time before Cristian Ansaldi’s penalty doubled the lead in the 62nd minute.

But Alexis Sanchez quickly pulled a goal back and Lukaku levelled before the Belgian’s 84th-minute penalty put Inter in front.

Lautaro Martinez made sure of the win in the 90th minute.

There was another ex-Manchester United player on the scoresheet as Henrikh Mkhitaryan bagged a brace in Roma’s 3-0 win over Parma.

Borja Mayoral opened the scoring in the 28th minute before Mkhitaryan took over, with the win moving Roma up to third.

Riccardo Orsolini scored the winner as Bologna came from behind to win 2-1 at Sampdoria, while Riccardo Improta’s goal gave Benevento a 1-0 win at Fiorentina.

Udinese climbed away from trouble as Rodrigo De Paul’s 34th-minute strike gave them a 1-0 win over fellow strugglers Genoa.

Alexander Isak got the goal midway through the second half as he headed home Adnan Januzaj’s cross.

Valencia came from two goals down to salvage a 2-2 draw away to Alaves.

The hosts got off to a superb start as Ximo Navarro had them in front just two minutes in and Lucas Perez doubled the lead from the penalty spot with a little over quarter of an hour gone.

But Manuel Vallejo pulled one back in the 72nd minute and Hugo Guillamon levelled the scores five minutes later.

Mid-table duo Eibar and Getafe shared the spoils from a goalless draw.

Granada’s strong early form was halted as Real Valladolid won 3-1 at Nuevo Los Carmenes to climb off the foot of the table.

Union Berlin climbed to fifth in the Bundesliga with a 2-1 win at Cologne, with Max Kruse scoring the winner on the rebound in the 72nd minute after seeing his penalty saved by Timo Horn.

A first-half hat-trick from Jean-Philippe Mateta gave Mainz their first league win of the season as they won 3-1 at Freiburg, who replied in the second half through Nils Petersen.

Lille moved to within two points of Ligue 1 leaders Paris St Germain with a 4-0 rout of Lorient.

Following PSG’s defeat to Monaco, Lille took full advantage as Yusuf Yazici scored in either half before goals from Luiz Araujo and Jonathan David completed the scoring.

Lyon sit third, a further two points back after Tino Kadewere’s 78th-minute strike was enough to claim a 1-0 win at Angers.

And Montpellier are also on 20 points after Gaetan Laborde’s 68th-minute strike sealed a 4-3 win over Strasbourg.

The visitors levelled three times in an entertaining first half, scoring twice from the penalty spot, but had no answer after the break.

Nimes climbed away from trouble as Renaud Ripart’s penalty gave them a 1-0 win away to Reims, while Lens were 1-0 winners at Dijon thanks to Arnaud Muinga’s strike.

Nantes and Metz shared the points in a 1-1 draw.