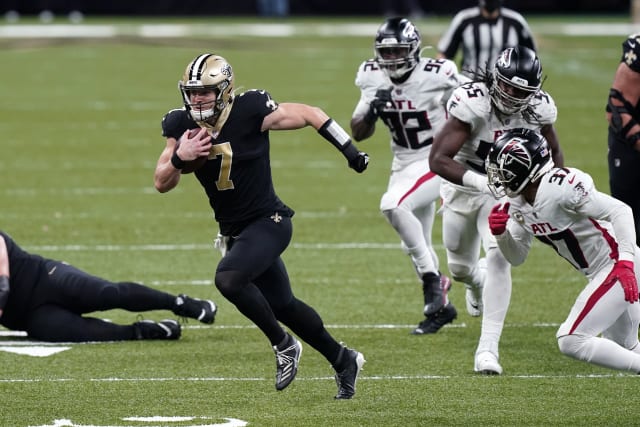 Taysom Hill shone in his first career start for the New Orleans Saints as they beat the Atlanta Falcons 24-9 for a seventh straight win.

Hill got the nod in the place of the injured Drew Brees and completed 18-of-23 passes for 233 yards while running for 51 yards and two touchdowns.

Saints running back Alvin Kamara became the first player in NFL history to collect at least 500 rushing yards and 500 receiving yards in each of his first seasons.

The Pittsburgh Steelers moved to 10-0 with a 27-3 rout of the miserable Jacksonville Jaguars.

Ben Roethlisberger threw for 267 yards and two touchdowns while Benny Snell ran in another score on the ground.

Derrick Henry scored in overtime as the Tennessee Titans beat the Baltimore Ravens 30-24.

Henry finished with 133 yards for a short-handed Tennessee team, 29 of them on the game-winning score, after Justin Tucker’s 65-yard field goal for Baltimore sent the game into overtime.

The Cincinnati Bengals lost quarterback Joe Burrow to an apparently season-ending knee injury as they were beaten 20-9 by Washington.

Burrow, the top overall draft pick this year, was 22-of-34 for 203 yards and a touchdown before being sandwiched by two Washington defenders in the third quarter.

After being carted off, Burrow wrote on Twitter: “Thanks for all the love. Can’t get rid of me that easy. See ya next year.”

The Houston Texans hung on for a 27-20 win over the New England Patriots, with an attempted Hail Mary from Cam Newton falling 12 yards short of the end zone.