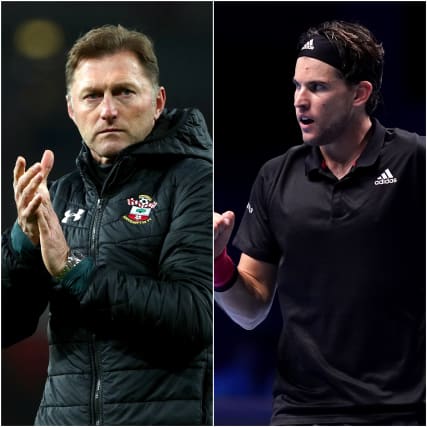 Ralph Hasenhuttl has admitted Southampton can draw inspiration from countryman Dominic Thiem in their pursuit of consistently competing with the best clubs in the Premier League.

The Austrian takes his team to Wolves on Monday knowing a victory will move them back into the top four and while that may be an unrealistic aim come the conclusion of the campaign, the 53-year-old is always keen to strive for better.

Approaching two years at St Mary’s, the former RB Leipzig boss has taken the Saints from relegation candidates to an established mid-table side and is aware the way to improve is to go toe to toe with the elite.

It has been a similar story for Austria tennis star Thiem, who at the age of 27 finally clinched a maiden grand slam at the US Open in September despite playing in an era with greats Roger Federer, Rafael Nadal and Novak Djokovic.

Hasenhuttl said: “I didn’t look from such an angle but there are definitely some comparisons.

“If you want to develop, you need these games against big teams and big players to see how good they are and then to learn to adapt your game. This is what he did also.

“It’s not only waiting about until they are too old and not playing anymore because others will do the same and then you must compete with them.

“For us it’s about trying to compete with the top teams. I said one time the quote that ‘if you want to be a lion, you have to fight with lions’ and I think this fits very good.

“You only get better if you have these games. Sometimes it is a losing game but even then you can learn a lot from this.”

After Thiem stormed through to the final of the ATP Finals on Saturday with a remarkable victory over Djokovic, Hasenhuttl will hope his players can achieve a positive result at Molineux.

In Wolves, Southampton have a direct rival for a top-eight finish and also a club who can act as inspiration to make the jump to battle with the traditional top six.

“We are not scared of any team anymore,” Hasenhuttl added. “This is the first step to being successful.”

In different times, the Saints manager would have been in attendance at London’s O2 Arena on Sunday to watch his fellow Austrian take on Daniil Medvedev in the final.

Hasenhuttl is hopeful Thiem will be able to watch a game at St Mary’s soon, he added: “I know Dominic very well because we’ve met each other a few times. He’s a Chelsea fan!

“I tried to invite him but then it was the pandemic and it didn’t work. I’m always following his development and his game.

“It’s amazing the progress he has made. I would like to have watched him live once here in England, in London, but it’s not possible at the moment.

“There will come a time when I can see him playing, hopefully then he is still a top player. For me, he has the best package for being number one in the future, which is his biggest goal and I’m sure he can reach it.”