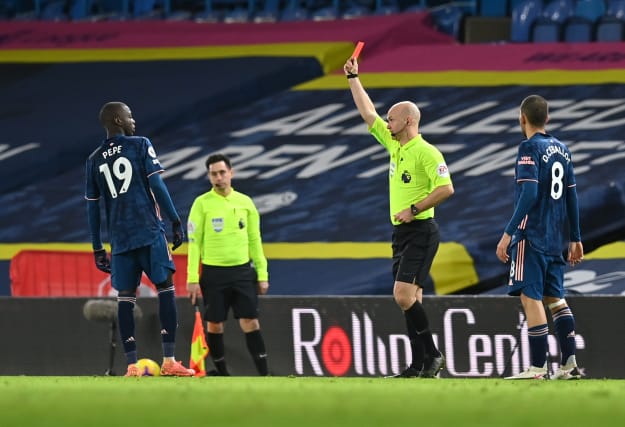 Nicolas Pepe was sent off for a headbutt to leave Arsenal clinging on for a goalless draw at Leeds.

Five minutes into the second half Pepe squared up to Ezgjan Alioski and pushed his head into the Leeds winger’s.

Referee Anthony Taylor went to the pitchside monitor to review the incident and showed the Gunners’ £72million record signing a straight red card.

Pepe had complained last week that he was not getting enough playing time under Mikel Arteta.

But the Ivory Coast winger will not have endeared himself to his boss after only his second Premier League start of the season ended in disgrace.

Gunners keeper Bernd Leno made fine saves from Patrick Bamford and Stuart Dallas, while Rodrigo clipped the crossbar and Bamford and Raphinha both hit a post as the 10 men dug in for a point.

Fulham suffered more penalty anguish as a brace from Dominic Calvert-Lewin helped Everton to a 3-2 win.

England striker Calvert-Lewin scored twice in the first half and Abdoulaye Doucoure’s first goal for the Toffees proved key in the end.

Bobby Decordova-Reid had cancelled out Calvert-Lewin’s opener but slack play at the back saw Fulham fall two behind before they were handed a lifeline from the penalty spot in the 67th minute.

But hot on the heels of Ademola Lookman’s Panenka nightmare last time out, Ivan Cavaleiro slipped and skied his spot-kick.

Ruben Loftus-Cheek did pull one back but Scott Parker’s side suffered a seventh league loss of the campaign.