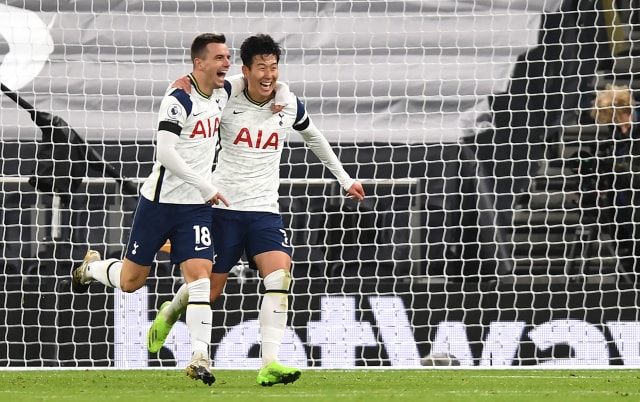 Jose Mourinho watched Tottenham produce one of his trademark performances to secure a 2-0 Premier League win over Manchester City and send out a message in the title race as they moved back to the top of the table for at least 24 hours.

Counter-attacking goals in each half from Son Heung-min and substitute Giovani Lo Celso handed Spurs a statement victory despite Pep Guardiola’s men dominating possession in the capital.

The City boss signed a contract extension this week, but was not able to toast it with three points after his team failed to break down the disciplined and organised hosts.

It meant Mourinho, who celebrated a year in charge of Tottenham on Friday, again got one over his old rivals in north London.

In the lunchtime kick-off, Chelsea extended their scintillating recent form with a 2-0 win over Newcastle at St James’ Park.

Timo Werner shrugged off his international embarrassment to inspire – four days after featuring in Germany’s humiliating 6-0 Nations League defeat to Spain – as Chelsea made it five straight wins in all competitions against Steve Bruce’s strugglers.

A 10th-minute own goal by Federico Fernandes helped the visitors on their way before Werner’s brilliant solo charge in the 68th minute cued up the simplest of opportunities for Tammy Abraham to effectively seal victory.

Sean Longstaff’s stunning 30-yard drive which rattled the woodwork proved the only real positive for the home side, who simply struggled to match Frank Lampard’s confident side for much of the afternoon.

Danny Welbeck’s first goal for Brighton set Albion on their way to a first win in seven league matches amid a controversial finish in a 2-1 victory over Aston Villa at Villa Park.

The former Manchester United and Arsenal striker struck to give the visitors the half-time lead before the hosts equalised at the start of the second half through Ezri Konsa.

Solly March quickly restored Brighton’s lead with a lovely curling effort, however they were made to sweat in injury-time as Tariq Lamptey was sent off for two bookable challenges on John McGinn and then Jack Grealish.

Lamptey had not even taken his seat on the bench before Villa were then awarded a penalty after March brought down Trezeguet. However, referee Michael Oliver reversed his decision after being invited to consult VAR.

Villa have now lost all three home matches since their emphatic 7-2 defeat of Premier League champions Liverpool at the beginning of October.