Brighton rock Aston Villa with Danny Welbeck back on scoresheet 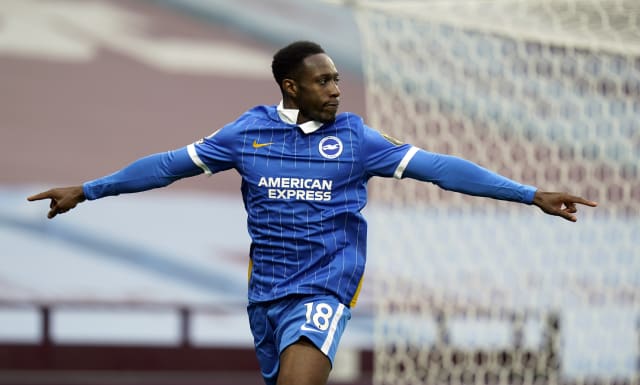 Danny Welbeck’s first goal for Brighton set Albion on their way to a first win in seven Premier League matches amid a controversial finish at Villa Park.

The former Manchester United and Arsenal striker struck to give the visitors a half-time lead before Aston Villa equalised at the start of the second half through Ezri Konsa.

Solly March quickly restored Brighton’s advantage with a lovely curling effort and Graham Potter’s team held on comfortably in the end for a 2-1 victory.

However, they were made to sweat in injury time as Tariq Lamptey was sent off for two bookable challenges on John McGinn and then Jack Grealish.

Lamptey had not even taken his seat on the bench before Villa were then awarded a penalty after March brought down Trezeguet. However, referee Michael Oliver reversed his decision after being invited to consult VAR.

Villa have now lost all three home matches since the emphatic 7-2 defeat of Premier League champions Liverpool at the beginning of October.

Unsurprisingly, Dean Smith named an unchanged team after winning so impressively at Arsenal prior to the international break. However, the Villa boss was forced to alter his plans after only five minutes when Ross Barkley was injured.

The midfielder appeared to tweak a hamstring while taking a free-kick and he was replaced by Bertrand Traore.

Smith will be hoping it is not a serious problem as Barkley would be a big miss for Villa, having impressed since his arrival on loan from Chelsea.

Things got worse for the hosts as they fell behind after 12 minutes. The goal was against the run of play but it was well-worked by Brighton. Pascal Gross and Adam Lallana combined to win back possession inside their own half, before the latter sent Welbeck clear with a neat through ball.

Welbeck still had plenty to do, carrying the ball half the length of the pitch before keeping his composure to calmly lift his shot over former Arsenal team-mate Emiliano Martinez with a clever finish.

Villa should have quickly equalised but Aaron Webster denied Trezeguet with a heroic goal-line clearance before the Egyptian then somehow blazed the rebound over the crossbar from seven yards out.

When Trezeguet did hit the target midway through the first half, this time with an effort from just outside the area, Mathew Ryan got down well to make the save.

Martinez was out quickly to thwart Neal Maupay when he was put through on goal by Welbeck as Brighton looked to extend their lead.

Villa finished the first half strongly. Ryan made an unorthodox save on his goal-line to kick away a header from Tyrone Mings, before Ben White made a goal-saving block to deny Ollie Watkins.

The hosts maintained their momentum after the break and were deservedly level at the start of the second half. Traore put a brilliant ball into the box from a free-kick and Konsa, timing his run to perfection, slid in to turn the ball home with an outstretched foot.

The game had become end to end and Brighton restored their advantage after 56 minutes. Gross switched play to the left flank, picking out March with a raking pass. March then curled a fine shot beyond Martinez and into the far corner of the net.

The frenetic pace looked to have caught up with the players at the midway-point of the second half as the tempo hit a bit of a lull. Villa were starting to look tired and devoid of ideas, while Brighton were also a little leggy and in no real rush to get up the pitch.

When they did, via a counter-attack in the 78th minute, Maupay, at full stretch attempting to get on the end of a Gross cross, headed the ball wide.

Brighton were comfortably protecting their lead but it all threatened to go wrong in the closing stages. Lamptey was sent off in injury time after collecting two yellow cards in quick succession.

Villa were then awarded a penalty, although replays suggested March might have played enough of the ball. Referee Oliver thought so after taking a look at the pitchside monitor and overturned his initial decision, much to the fury of Villa boss Smith.