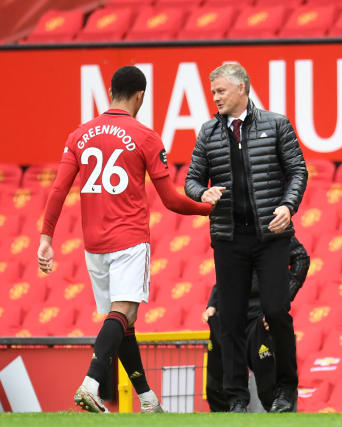 Manchester United manager Ole Gunnar Solskjaer has “no doubts” that Mason Greenwood will soon be back to his best as the talented teenager edges towards a return from illness.

Long touted as a future Old Trafford star, the 19-year-old academy graduate scored 17 goals in all competitions during a stunning breakthrough season.

No teenager has scored more in a campaign for United, equalling the tally managed by greats George Best, Brian Kidd and Wayne Rooney with performances that saw Greenwood fast-tracked into the England set-up.

But the 19-year-old, who joined Phil Foden in being sent home shortly after September’s senior debuts in Iceland for breaching the bio bubble, has yet to reach last season’s levels, netting twice across eight appearances.

“You have to take a step back sometimes,” manager Solskjaer, who knows a thing or two about scoring for United, said. “The boy’s only 19 and he’s had a fantastic year.

“If we go a year back, I left him out of the Carabao Cup against Chelsea. Mason stayed back and played against Doncaster in the Checkatrade (Trophy) to get game time and that’s how far he’s come.

“Now he’s got 19 goals for the first team, he’s made his England debut, he scored on his first Under-21s game. He’s had a fantastic development.

“Of course the headlines are going to be there about him when he scores, (or) if he doesn’t play.

“Everyone’s allowed to not be well and if you’re not well, you can’t train.

“He’s now stayed away, he’s been away eight or nine days from training. We’re just starting building him up again.

“I have no doubts about him. He’s got a very good head on him and his talent is there for everyone to see.”

Saturday evening’s return to Premier League action against West Brom may well come too soon for Greenwood, with Solskjaer saying “he’ll be back soon”.

Luke Shaw, Jesse Lingard and Phil Jones were the only players unable to train on Friday, when Marcus Rashford returned for the first time since suffering a shoulder injury at Everton before the international break.

Victor Lindelof’s ongoing back complaint needs to be assessed before a game that could see deadline-day signing Alex Telles finally make his league debut after a bout of coronavirus.

There had been confusion over the left-back’s availability due the Brazilian Football Confederation reporting another positive test during an international break in which Paul Pogba once again made headlines.

The 27-year-old midfielder’s United future always seems to come under fresh scrutiny during his periods with the France national team, with their manager this time fuelling speculation.

Didier Deschamps said Pogba cannot be happy with his playing time and positioning at United, but Solskjaer brushed aside such talk.

“Paul’s had a difficult season last season,” he said. “He’s had Covid now (earlier in the season).

“I think those three games he played for France helps both us and Paul, and it helped France. He gets a rhythm, he gets his fitness.

“I’ve spoken to Paul and he certainly felt towards the end of the Portugal game and definitely the end of Sweden game he felt stronger for it.

“To have him in form and happy is going to be vital for the run that we can hopefully put together now.”

Put to Solskjaer that Deschamps’ comments on Pogba are unhelpful, the United boss said: “We always get questions and, managers, we try to answer as well as we can.

“I think the press sometimes makes more of it and people maybe at home not having the whole interview make more of it as well.

“I spoke to Paul today about it. Of course he’s not happy when he’s not playing and not playing really well. He’s not been happy with his performances.

“He plays in the same position for France as he’s does for us, so that’s not a different scenario.”