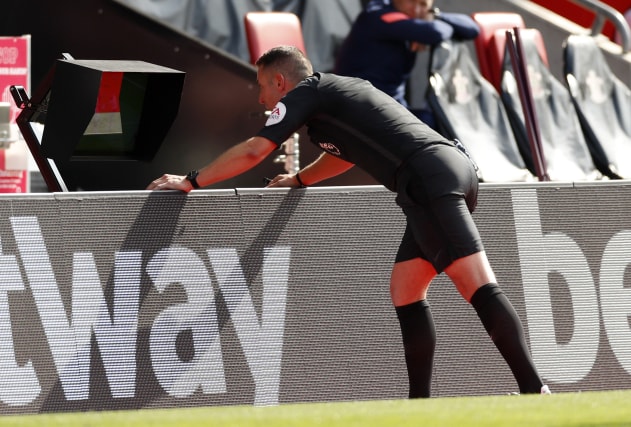 Former referee Mark Halsey questioned the wisdom of putting David Coote into the “pressure cooker” of a Liverpool match after his controversial VAR performance last month.

Coote was lined up to be the video official in Sunday’s game against Leicester at Anfield, his first Reds’ match since his controversial performance in the Merseyside derby where he failed to punish Jordan Pickford for a reckless challenge on Virgil Van Dijk which resulted in a serious knee injury for the Holland captain.

However, the Nottinghamshire official has subsequently been withdrawn and will instead take charge of West Brom’s trip to Manchester United on Saturday.

“It’s poor appointing. There was a massive furore about the incident and we had two or three different reasons why it wasn’t picked up; the offside nullified the challenge which was nonsense,” Halsey told talkSPORT.

“Why put him in that pressure cooker? There was no need to put him on that fixture list as VAR with Liverpool.”

The former Premier League official also hit out about the falling quality of refereeing generally.

“I hate to criticise fellow colleagues but over the last six to seven years the standard is dropping alarmingly, at all levels,” he added.

“We have some great referees out there at the top, and I think Michael Oliver is by far our best referee; Martin Atkinson, Mike Dean, they are experienced guys and they are good referees.

“We have a failing with a number of top coaches who can take our referees forward.”