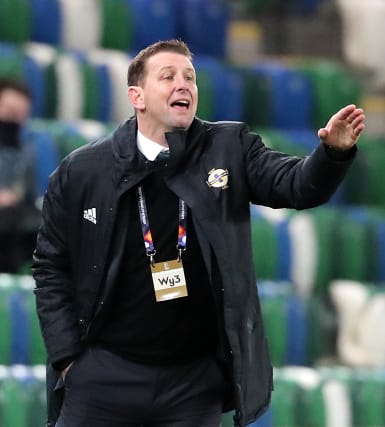 Ian Baraclough insisted he had every confidence that Northern Ireland could be a factor in next year’s World Cup qualifiers despite the double disappointment of missing out on Euro 2020 and suffering relegation in the Nations League.

A week after the Euro 2020 play-off loss to Slovakia, Northern Ireland suffered relegation before Wednesday’s 1-1 draw with Romania after their opponents were awarded a walkover win from Sunday’s cancelled match against Norway.

Wednesday’s result earned Northern Ireland only their second point in the Nations League, but left Baraclough still awaiting his first win inside 90 minutes since taking charge.

They will be happy to see the back of the competition for two years, but Baraclough took away positives from the performances of several players as he looked to next month’s draw for the World Cup qualifiers.

Asked if he remained confident Northern Ireland could mount a qualifying challenge, he said: “Why wouldn’t I be?

“I’ll take it on the chin and you can throw all the criticism you like at me. I’m blooding players and we’re seeing things from Ali McCann and Dan Ballard, giving Ethan Galbraith 15 or 20 minutes.

“These lads have to got to learn and they’ve got to learn in a tough environment. I’m very, very happy with what I’ve seen in the last couple of months.

“They’ve dealt with the disappointment of losing on Thursday night and the kick in the teeth from Sunday (a late 2-1 defeat in Austria) and they’ve gone again and given me absolutely everything.”

Baraclough handed a debut to Matty Kennedy while Galbraith came off the bench to make his first appearance, while there was a second start for McCann after his impressive bow in Austria.

Two years ago, Northern Ireland lost all four Nations League games under Michael O’Neill but had used the games to establish the likes of Jamal Lewis and Bailey Peacock-Farrell in the side, and it is a similar story this time around.

“Michael experimented in his time in the Nations League and we have had to look at different things as well,” Baraclough said.

“We want to bring through players at the right time. I’m not saying the older players are looking to be shipped out – we’ll go again in March – but at some stage young players have to start coming through and we have to give them some game time.

“The Nations League is a competition that you’re better doing that in.”

With the World Cup qualifying draw a little over two weeks away, Baraclough will soon be handed a new focus.

This has proven a frustrating international window in which two key objectives were missed, but the manager insisted progress had been made as he looks to another intensive schedule in 2021, with triple-headers on the agenda in March and September.

“I’ve enjoyed my time so far,” he said. “We knew it was going to be a big ask. The games have come thick and fast. The triple-headers were always going to stretch us as a squad of players have we have to get the balance right.

“We’ve now dealt with two months of triple-headers and the players know exactly what to expect.”