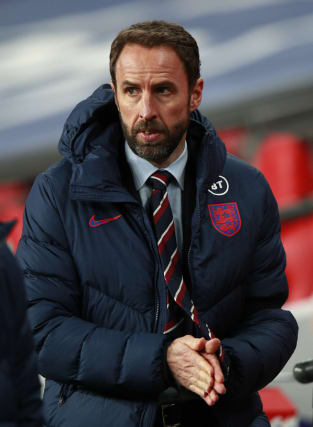 England boss Gareth Southgate is keeping his fingers crossed his players stay fit over a busy winter as he left the door ajar for new call-ups ahead of the European Championship.

Despite the coronavirus pandemic causing upheaval in the football calendar there have been three international breaks across the past three months.

The eight-game run ended with a comfortable 4-0 victory over 10-man Iceland on Wednesday evening as a Phil Foden brace and goals for Declan Rice and Mason Mount saw England head into the winter on the back of a win.

Southgate has had to battle a host off-field issues among his ranks in recent weeks but will now not have a squad gathering until the World Cup qualifiers begin in March.

Given current Covid restrictions he cannot keep across the progression of his players as he usually would – but will let them get to work on performing for their clubs, something he insists could see individuals play themselves into the picture in time for the rearranged Euro 2020 finals.

Asked how he will keep in touch with his players, Southgate replied: “Some of that will be via Zoom, for sure, because we’re obviously not going to be able to visit.

“It’s very complicated visiting the clubs for games, but with the training grounds as well, it’s hard to visit – you’re not allowed to go to places on consecutive days and there are some real restrictions on that.

“We’ve also got to respect the clubs have got a job to do now, we tried to get the balance right of respecting the clubs in this period whilst working on our team.

“We’ve tried our best to do that but we also now have to take a step back and there’s two-thirds of the season to go, the club form is going to be important.

“We’ve learned a lot about players in this period, but there’s still opportunities for players to play their way into the frame with their clubs.”

Southgate has admitted the September international break – staged before many players had returned to full pre-season training – should not have gone ahead.

But he praised his players for wanting to be involved in what was a Nations League dead rubber against Iceland as they continue a gruelling year of football.

“I think the desire of the players that were here to play for England was was hugely pleasing and to have the respect for each other to not want to pull out under pressure, which has been difficult for them,” he added.

“Of course, we’re going to have such an intense schedule and that is a bit of a concern.

“We’ve never had a winter break – the one year we had it, the championships were called off (due to Covid).

“This year, we haven’t got it again. So we don’t make life easy for ourselves. But, fingers crossed, the players can come through the period fit and well.”