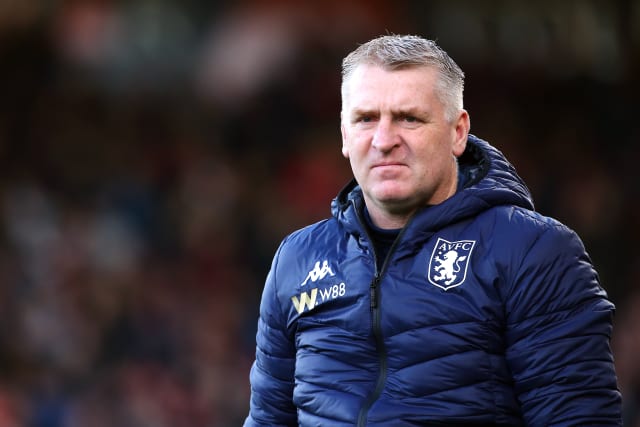 Aston Villa head coach Dean Smith insists he needs more evidence to prove player welfare is at risk before he backs the reintroduction of five substitutions in the Premier League.

Prior to the international break the likes of Manchester United boss Ole Gunnar Solskjaer and Liverpool’s Jurgen Klopp were outspoken on the need to bring back the option for more replacements during matches to prevent injuries.

But Smith, who has seen Jack Grealish and John McGinn each play three times in a week for England and Scotland respectively, has not seen an impact on his players.

“We had a meeting yesterday and we spoke at length about each manager’s individual feelings,” he said.

“I can only go from my football club, and if player welfare becomes an issue then it’s a no-brainer and you have to increase substitutions or look at the fixture scheduling.

“At the moment, I’m not seeing any trends from my players that suggest player welfare is an issue.

“I speak to my players all the time – I want the best for them and I want to look after them. That’s what we’re doing.”

Regarding his own current injury situation Smith said goalkeeper Tom Heaton, who has been out since New Year’s Day with a knee injury, continues to work his way back to fitness.

However, this weekend’s match against Brighton comes too soon for him or the likes of Bjorn Engels and Frederic Guilbert.

“(Heaton) played against Burnley Under-23s and he played an in-house game that we had last week,” he added.

“He needs a few more minutes but he’s training with the first team every day.

“Wesley Moraes is a bit behind but he’s starting to do some ball work and build up his strength. We’re trying to get him up to speed so that he can join in.

“Bjorn Engels has a thigh injury and he’s not trained with us yet, nor has Fred Guilbert who has a side strain. Kortney Hause should start back training today.”

Smith will hope, however, an in-form Grealish returns unscathed after some impressive displays for England.

“Jack’s at the top of his game and I’m really pleased for him and proud of him,” said the Villa boss.

“I’m pleased for him more than anything because he’s worked extremely hard and he continues to do so.

“I think anybody at Aston Villa would have more of a biased opinion and say he’s been performing like that for a while.

“I actually didn’t watch England vs Ireland because one of our other players had a bigger game in the Euro play-offs, John McGinn (for Scotland) against Serbia. I watched that game.”