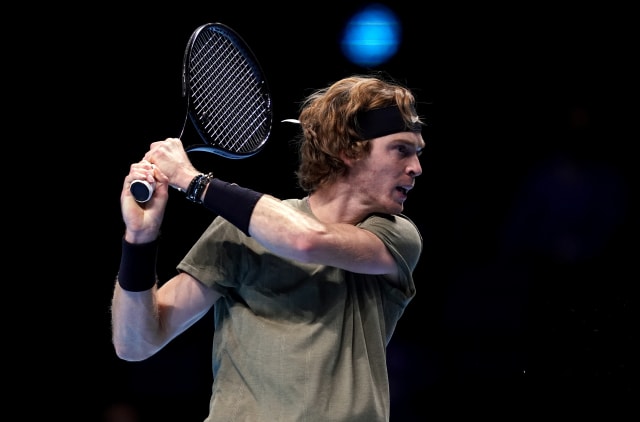 Andrey Rublev claimed his first victory at the Nitto ATP Finals in his dead-rubber clash with Dominic Thiem.

Debutant Rublev was already eliminated after two losses while Thiem’s brilliant victory over Rafael Nadal on Tuesday guaranteed him top spot in the group.

It was perhaps no surprise that Thiem experienced a comedown while Rublev, who missed a match point in his loss to Stefanos Tsitsipas, hit top form to win 6-2 7-5.

The Russian seized on a slow start from Thiem to move 4-0 ahead and, although the US Open champion recovered from a break down early in the second set, Rublev broke again and served out victory.

While the result was immaterial in terms of the future of the tournament, it still earned Rublev 200 ranking points and 153,000 US dollars (approximately £114,000) in prize money.

Meanwhile, Jamie Murray is to reunite with his former doubles partner Bruno Soares next season.

The pair split last spring, with Murray choosing to switch to fellow British player Neal Skupski, but he will be back with Brazilian Soares for 2021.

Murray won both his men’s doubles grand slam titles with Soares, the pair collecting the Australian Open and US Open trophies in 2016, while they qualified for the ATP Finals for three straight years.

Murray has failed to hit the same heights with Skupski, although they did reach the semi-finals of the US Open last year and were agonisingly close to qualifying for the O2 this time around.