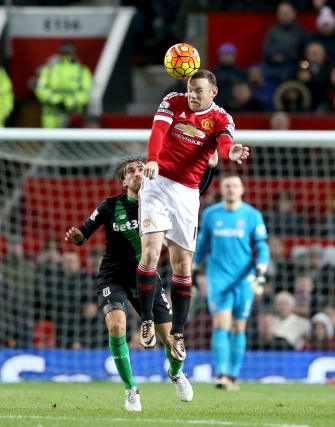 Wayne Rooney says "something needs to change" as too many former footballers are dying of dementia.

Nobby Stiles, like Rooney a former Manchester United and England player, died at the age of 78 last month, having been diagnosed with dementia and prostate cancer.

The death of the 1966 World Cup winner and the news team-mate Sir Bobby Charlton had also been diagnosed with dementia saw a renewed call for more investigations into the issues of head impacts and an increased risk of neurodegenerative disease.

Stiles' son John has backed calls to look at the amount of heading professional players do in training, while Sir Geoff Hurst and former England striker Gary Lineker want heading restricted in training at all levels.

Rooney said: "It's very important. I think the amount of players who have died in recent years from the disease is too many.

"It's difficult to see former players dying so young and knowing football might have been a part of that. It's really sad. You feel sad for the families of these guys who've passed way.

"The more research, the better. If that means with young children we stop them heading the ball in training...I don't know – but clearly something needs to change to make sure this doesn't happen to the next generation of players."

"Obviously when you have young children you don't want to lose your life so early because you headed the ball too many times.

"If not heading the ball so many times in training means you're going to live another 10-15 years then that's the natural thing, that's the thing that makes most sense to do.

"My eldest boy (Kai), when we lived in the United States, in his football team heading was banned in training and games.

"I thought, 'how could the ball be coming into young kids and them not head it?' But no one did, they let the ball run through."

The 52-year-old accepts the game would not be the same if heading was banned completely, but believes more can be done to reduce potential associated problems with small adjustments to training.

He said: "I headed the ball and it was a big part of my game. To be good in a game you have to do it in training.

"Now I think the situation is a bit better today because if you are talking about when (former West Brom and England striker) Jeff Astle played, for example – those types of balls were, like, big.

"When I started the balls were heavy. They were full of water when it was raining or wet.

"I remember in training when you headed you thought sometimes, 'it is a hard ball.' Nowadays the balls are much lighter.

"If they find out through the research that heading the ball 10 times during training is going to cause you dementia, then let's stop it. Let's find a way.

"But for me the great thing going forward is they are talking about it and recognising it.

"What solution they are going to find I don't know, but they are spending hours, days and months researching it and they will have to do something.

"But are they going to stop heading in games? Then it's not football any more.

"It's a great thing and it was about time for the game to recognise it. It's a great step forward."

Important words from our ambassador @TheGeoffHurst in the media this morning discussing heading in football and dementia.

As the largest provider of free football for children in the UK, we've ensured heading does not feature in our football programme. https://t.co/Blc10b2OeO

He added: "I remember (as a young player) we used to play with a smaller, lighter ball, so there is a way, especially with the better technology.

"We had a great exercise. The ball was on a rope and you were heading it all the time, but that ball doesn't have to be a proper ball.

"It is not about the ball but the opposition and your timing. It is about your leap and jump.

"If I think about it now I would say why not stop it completely? The kids can have a ball, but maybe a plastic, soft ball or a sponge ball."