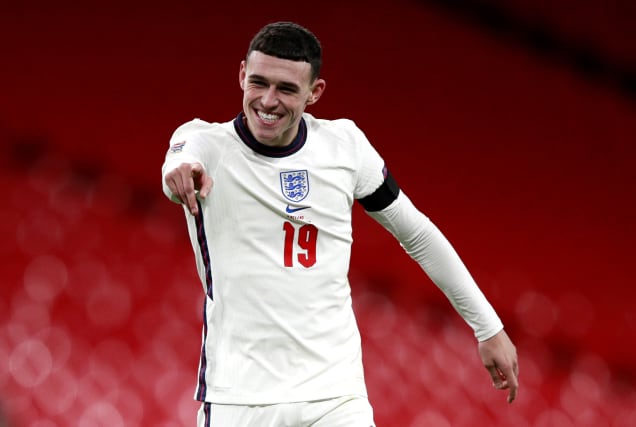 The Three Lions brought down the curtain on a difficult year of international football with a comfortable 4-0 Nations League victory at Wembley in which Foden starred.

The Manchester City forward had made his debut against Iceland in September before being sent home for breaking Covid regulations and then dropped for the following month’s triple-header of England games as part of his punishment.

But he returned with a bang and his late brace of fine finishes capped a happy end to the year for Southgate – who had earlier seen Declan Rice and Mason Mount score in what was a Nations League dead rubber.

“Tonight’s performance is why we picked him in September because we know what he is capable of,” he said of Foden’s redemption story.

“I’m really pleased for him and his family, to have the experience he had in September is really tough for a youngster and we all make mistakes.

“What we were intent on doing was making sure that when he came in this month in a difficult situation, you are walking in the door and you’re looking at everybody’s faces and you know the last time you saw them it was complicated.

“It took him a few days I think to settle into the camp and start to smile and relax a bit more – then tonight we felt was a really good game for him.

“We know what he is capable of doing and he is one who is going to be exciting for the next few years for England.

“I think we are very conscious of a crop of young players coming through that we think will be fabulous for England for years to come. I think it was great for the public to get a glimpse of that.”

From Harry Maguire’s Greek court case and the high-profile bio breach by Mason Greenwood and Foden to injury headaches, empty stands and his own bout of Covid-19, this has been a tough autumn for Southgate.

Despite ending on a high, he did still highlight the fact the recent camps have been damaged by the off-field behaviours of some of his players – and called for improvements in that area moving forward.

“But we’ve also got to recognise that there are lessons we have got to learn from this period. We created dramas for ourselves on and off the pitch, which made life more complicated.

“We’ve been nowhere near the availability of all of our players and we have got to have a look at why that has been and reflect on that – so that is the balance really.”