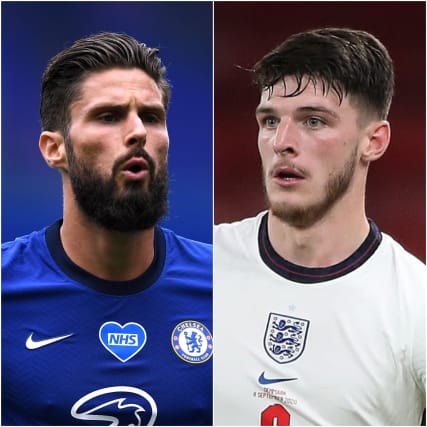 Chelsea could see a mass exodus in January to raise funds for the signing of West Ham’s DeclanRice, the Daily Star says. The paper reports Frank Lampard’s outfit could look to cash in on Tiemoue Bakayoko, Olivier Giroud, Emerson Palmieri, Danny Drinkwater and Antonio Rudiger to raise cash for the £70million-rated Rice.

Manchester United are set to follow suit and cut a number of fringe players in January to lower their wage bill, the Manchester Evening News says. Phil Jones, Timothy Fosu-Mensah, Sergio Romero and Marcos Rojo are heading for the Old Trafford exit door, as Ole Gunnar Solsjkaer looks at a potential rebuild next summer.

And Barcelona will also become a selling club, having to offload four players – including Samuel Umtiti and Martin Braithwaite – if they have any hope of landing long-term targets Eric Garcia and Memphis Depay, says the Daily Mail.

Paris St Germain could look to land JoaoFelix if Real Madrid complete a move for KylianMbappe, the Sun reports. The Ligue 1 side may face a challenge from Manchester United for the Portuguese teenager, who is currently on the books of Atletico Madrid.

Arsenal have been linked with a move for DominikSzoboszlai, reports the Daily Star. Szoboszlai, currently at Red Bull Salzburg, helped secure Hungary’s spot in Euro 2020 with a last-minute winner against Iceland, and the Gunners may face competition from other European sides for the midfielder.

Arkadiusz Milik: Napoli’s Polish striker has caught the eye of Everton and Tottenham, who could only have to shell out £10million to land the 26-year-old in January, says the Sun.

Granit Xhaka: The Arsenal midfielder could be on his way to Inter Milan, with Christian Eriksen coming the other way in a swap deal, says Corriere dello Sport.

Samuel Eto’o: The 39-year-old former Chelsea and Barcelona great could come out of retirement for a spell in the Spanish third tier, reports Marca.