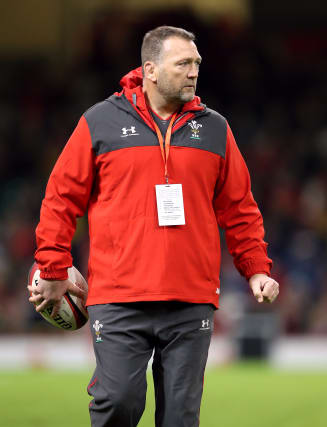 Wales have identified James Botham as a player of possible 2023 World Cup potential.

Wales continue their Nations Cup campaign against Georgia in Llanelli on Saturday, when they will attempt to halt a run of six-successive Test defeats.

“We thought that athletically he certainly has the ability to compete in international rugby.

“In those games, he had some big moments. It was at that point that we probably really identified him as someone going forward to 2023 that would certainly be in our plans.

“And with the injuries that we have at the moment, and the uncertainty over some people being able to start at the weekend, it was a great opportunity to bring him in.”

Not only was Botham’s grandfather one of the greatest cricketers ever to play for England, his father Liam also played professional rugby in both codes.

Botham’s maiden call-up comes ahead of remaining Nations Cup appointments with Georgia and England, plus a play-off fixture.

Wales head coach Wayne Pivac has already said that he will field a much-changed team against Georgia, and Wales continue to monitor Botham’s fellow back-row forwards Ross Moriarty (ankle) and Josh Navidi, who has been recovering from concussion.

“It’s literally a day-by-day process with them but their injuries have helped us look at other people,” Humphreys added.

“When we are talking about 2023, perhaps Shane Lewis-Hughes wouldn’t have had that opportunity in this campaign otherwise. It’s been great looking at Shane and James.”

Wales, meanwhile, are awaiting an update on centre Jonathan Davies, who hurt his right knee during last Friday’s 32-9 Nations Cup defeat against Ireland.

Davies only recently returned to action following a left knee injury suffered at the 2019 World Cup, and Humphreys said: “He is in the process of having scans.

“Probably in the next 24 hours we will identify how serious that knee injury is – but he seems to be up and walking about. He seems in a good place. Hopefully, it’s not too serious and he will be back pretty quick.”

Wales are currently on their longest run of losses since 2012, with problems in the set-pieces and an alarming penalty count contributing heavily to those defeats.

“Obviously, the boys are down in terms of outcomes of these games. It’s always tough times, but we see the bigger picture of where we need to go.

“Within that, there was always going to be blips and downs. As long as we are concentrating on where we need to go, with the players we need to get there, there is always that belief that we’ll get there.

“As a group of coaches, we know what we want to get to. We know what it’s going to take.”