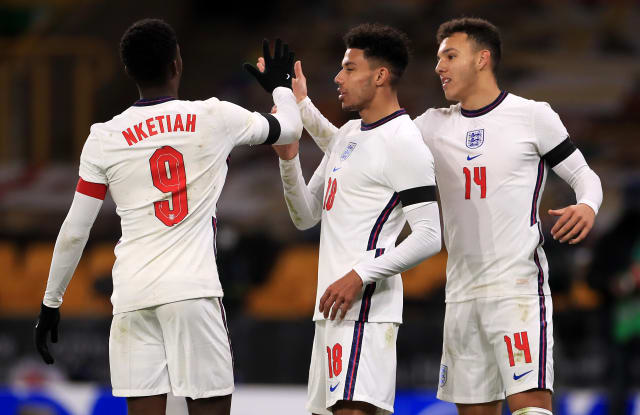 England Under-21 boss Aidy Boothroyd admits Jamal Musiala has put himself in contention for next year’s European Championship.

The Bayern Munich midfielder scored on his full debut for the Young Lions and starred in a 5-0 rout of Albania on Tuesday.

Eddie Nketiah added a brace with Callum Hudson-Odoi and James Justin also on target in the Young Lions’ dominant win at Molineux.

Nketiah also missed a penalty but the hosts wrapped up their Euro 2021 qualifying campaign and head to the group stage in Hungary and Slovenia in March unbeaten.

And 17-year-old Musiala, who can also play for Germany, has given Boothroyd a selection headache after just two Under-21 appearances for England.

“He gives me a nice problem going into March,” said Boothroyd. “I thought Jamal was excellent. You can see that physically he’s not finished. He’s going to be a brute of a man.

“His brain and his feet are the most impressive, he’s razor-sharp. We’re really pleased with him to step up the way he has done.

“It’s been great to get to know Jamal this week and the players have taken to him. He’s a really good player. Hopefully we can persuade him to stay with us and we’ll continue to push his development.

“We’ll have a look at it now and hopefully everyone will stay fit.”

Chelsea forward Hudson-Odoi opened the scoring after four minutes when he cut inside and Marco Molla allowed his shot through his hands.

Leicester’s Justin fired in after 26 minutes and Musiala grabbed a third, clipping in after swapping passes with Oliver Skipp just before the break.

Nketiah made it 4-0 early in the second half before missing a penalty, Molla saving his spot-kick having brought the striker down 10 minutes from time.

But the Arsenal forward did grab a second late on – his 16th Under-21 goal – when he cut inside and found the bottom corner.

Boothroyd, whose side had already won Group Three, added: “Despite the scoreline, I was a bit concerned prior to it because we’d not kept a clean sheet in a while. To score five and finish off the campaign like that is really pleasing.

“For me it’s not conceding. The strikers might win the games but good defences generally win championships.”