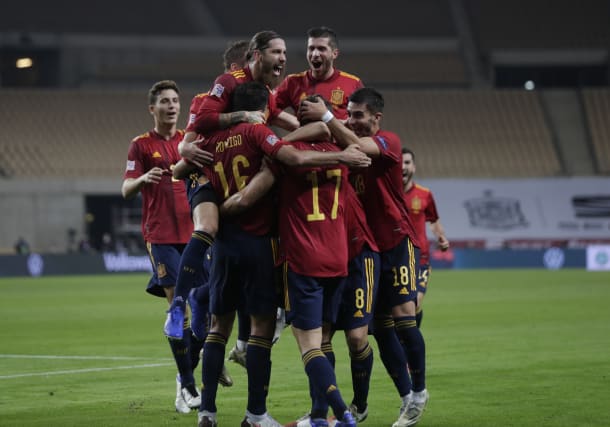 Manchester City winger Ferran Torres scored a hat-tuck as Spain thrashed Germany 6-0 in Sevilla to secure a place in the Nations League finals at the top of Group A2.

Alvaro Morata broke the deadlock in the 17th minute with a towering back-post header from a corner – but then saw another close-range effort ruled out for a debatable offside call.

Manchester City winger Torres made it 2-0 after 33 minutes when he volleyed the ball in after Dani Olmo’s header hit the crossbar.

Germany, who had only needed a draw to win the group, fell further behind just five minutes later when City midfielder Rodri nodded in from a corner.

Spain captain Sergo Ramos – who saw two penalties against Switzerland saved – was forced off just before half-time with what appeared to be a hamstring problem.

It was 4-0 after 54 minutes when Spain left-back Jose Gaya made the most of some uncharacteristic wayward German defending to set up another for Torres.

The City winger completed his hat-trick with 18 minutes left when he curled a first-time shot past Manuel Neuer.

Relegation in the group is still to be decided after Switzerland’s clash with Ukraine in Lucerne has was called off following more positive Covid-19 tests in the visitors’ camp.