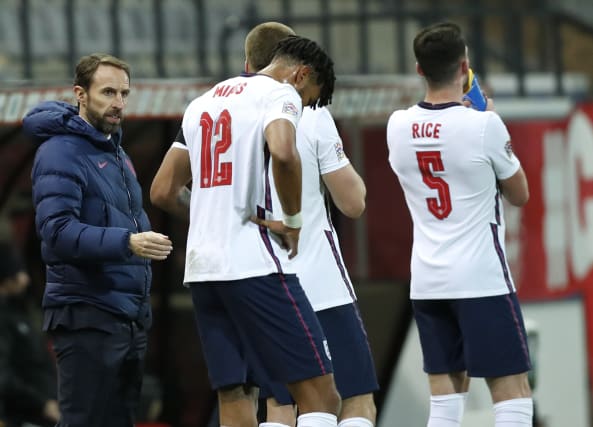 Gareth Southgate challenged England’s players to “cement” their place in his European Championship thoughts as he braces himself for pressure from club managers about game-time in the Nations League dead rubber against Iceland.

A strange, testing and truncated international year comes to a conclusion with Wednesday’s Wembley clash between sides that already known their fate.

Iceland’s relegation from the top tier was confirmed last month, while Sunday’s 2-0 loss to Belgium ended England’s hopes of reaching the Nations League finals and bettering their third-place finish in the inaugural edition.

Given the circumstances surrounding the final match of the November triple-header and ongoing stresses of an unrelenting calendar, Southgate expects club managers to be twitchy about the use of their players on Wednesday.

But with time running out to earn a place in the squad for next summer’s rearranged Euros, this is one of the last occasions to experiment and impress.

“In terms of Iceland, it’s still a game that gives opportunities for people to cement a place in the team or in the squad,” Southgate said.

“Again, we’ll find out a lot now because for sure there’ll be a lot of pressure from some clubs on their own players. That’s what we live with consistently.

“But we’ve got players that want to play for England and we have pride in the way we play and we want to finish the game well.

“Our performance (against Belgium) was excellent and the players pushed until the 93rd minute and I couldn’t have been prouder of them doing that.

“So, we have players that want the opportunity to play. We’ll need to freshen the team a little bit but we’ll have to assess that over the next couple of days.”

Southgate named an initial 29-man squad for this month’s triple-header but, even with 17-year-old Jude Bellingham promoted to the group, the England manager could be down to 21 players against Iceland.

Trent Alexander-Arnold, James Ward-Prowse and Marcus Rashford were unable to meet up due to existing issues, while Joe Gomez sustained a knee injury in training ahead of the friendly win against the Republic of Ireland.

Conor Coady had to pull out after a Track and Trace alert about possible Covid-19 exposure and Raheem Sterling is withdrawing due to a calf complaint, with Jordan Henderson and Ben Chilwell coming off with knocks against Belgium.

Harry Maguire is available after suspension but Reece James remains banned for Iceland’s visit, continuing an absentee-heavy theme that Southgate has had to deal with this in this year’s international meet-ups.

“It’s obvious throughout the autumn we’ve been missing so many players in every camp,” the England manager said.

Wing-backs James, Bukayo Saka and Ainsley Maitland-Niles have impressed since making their senior debuts, while Dominic Calvert-Lewin, Coady and Kalvin Phillips have made strong cases this autumn.

Two-cap Phil Foden will surely get a chance to shine against Iceland after seeing Jack Grealish produce another mouthwatering performance in a loss to Belgium that left Southgate focusing on the positives.

“I think there are some other outstanding teams around Europe. France have obviously qualified last night against Portugal, who are another top side. It’s so competitive.

“It looks like three different ones again will qualify for this Nations League. That sums up how competitive Europe is.

“We’re a team who I believe have improved across the autumn, having had 10 months without playing.

“September was a mess because players just weren’t fit.

“But since then we’ve learned so much and, as I said, I’m really pleased with some of the individual progress, the progress as a team.

“The last two matches in this competition to this point, I don’t think we’ve got what we deserved from (them). But they’re the fine margins of knockout football.”