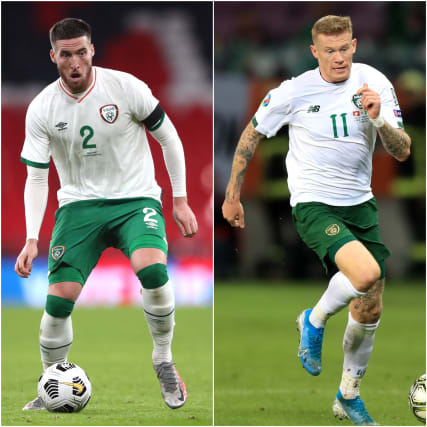 The Republic of Ireland’s hopes of avoiding Nations League relegation have been dealt a fresh blow after Matt Doherty and James McClean tested positive for coronavirus.

Tottenham defender Doherty and Stoke midfielder McClean, who both started Sunday’s 1-0 defeat by Wales, have been isolated from the rest of the squad which flew back to Dublin on Monday ahead of Wednesday night’s wooden spoon clash with Bulgaria.

“The players have been isolated from the group as per COVID-19 protocols, and the HSE have been informed of this development.

“The rest of the staff and squad tested negative ahead of the flight back to Dublin this morning before the UEFA Nations League match against Bulgaria on Wednesday.”

The pair are the latest members of the squad to test positive in the last two months, punching another hole in beleaguered manager Stephen Kenny’s resources.

Aaron Connolly and Adam Idah both missed last month’s Euro 2020 play-off semi-final defeat in Slovakia as a result of what proved to be a false positive test for a member of staff with whom they had been in close contact on the fight to Bratislava.

The following day, John Egan, Callum Robinson, Callum O’Dowda and Alan Browne were withdrawn from the squad to face Wales at the Aviva Stadium after another positive test within the camp, and Kenny has since lost Robinson and Browne to Covid-19 positives this month.

Coupled with injuries to Seamus Coleman, Enda Stevens, Harry Arter, Egan and Connolly, James McCarthy’s unavailability for family reasons and the disciplinary bans which will keep midfielders Jeff Hendrick and Jayson Molumby out on Wednesday evening, Kenny faces a major challenge in pulling together a team for a game Ireland cannot afford to lose.

They are without a win in the new manager’s seven games to date and without a goal in the last six, and they sit only a point ahead of bottom-of-the-table Bulgaria in their Nations League group.

In addition, they are in real danger of dropping out of the second pot of seeds in the draw for the forthcoming 2022 World Cup qualification draw.