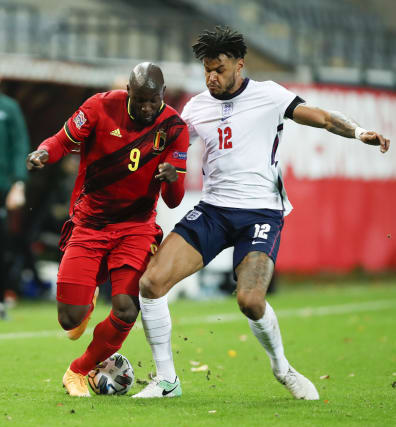 The Three Lions finished third in the inaugural competition but will not be present at next year’s finals following a frustrating night in Leuven.

England dominated large periods, especially in the second half, but lacked the cutting edge required to respond to Youri Tielemans’ deflected strike and a Dries Mertens free-kick as the match ended 2-0.

Those goals stuck in the craw after a positive performance at the world’s top-ranked side, but Mings know they need to remember the bigger picture with the rearranged European Championship looming large.

“I think we look at the goals and they’re disappointing in the way that they went in,” Mings said.

“Obviously I don’t enjoy conceding goals, I don’t enjoy losing, so it’s hard to sit here now and say ‘yeah, there are positives’ but I know they are.

“I know that the performance of the team for large periods of it was good, on the ball, off the ball, so for sure we’ll take positives, I guess, when the dust settles.”

Mings’ deflection inadvertently took Tielemans’ strike just away from Jordan Pickford for Belgium’s opener, while Declan Rice was bemused by the referee’s decision to give what proved to be a costly free-kick.

“The decision for the free-kick is probably questionable,” Mings said. “I haven’t seen it back but I don’t want to sit here and dwell on refereeing decisions too much.

“I think the defending of the wall is a strange question. The ball went over.

“You could argue should we or shouldn’t we have jumped or, yeah, I guess on another day it hits us and it doesn’t go in.

“But it was, like I said, a game of fine margins and unfortunately we came out on the wrong side of that.”