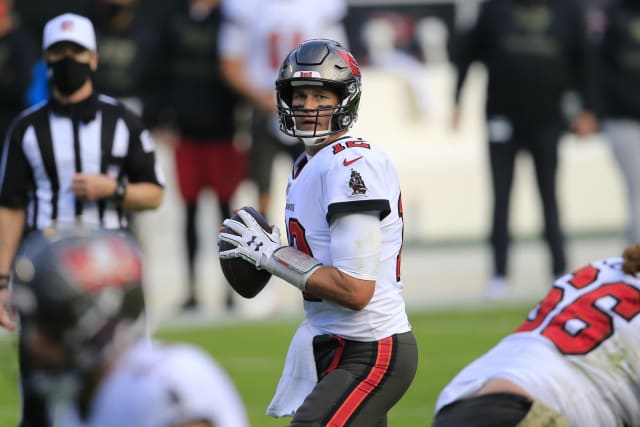 Six-time Super Bowl winner Tom Brady threw for 341 yards, passed for three touchdowns and rushed for another as the Tampa Bay Buccaneers beat the Carolina Panthers 46-23.

After the worst loss of his career last week against New Orleans Brady threw touchdown passes to Cameron Brate, Mike Evans and Rob Gronkowski and then ran one in for himself in the fourth quarter.

In the NFC East Daniel Jones threw for 244 yards and ran for a touchdown as the New York Giants beat the Philadelphia Eagles 27-17.

Wayne Gallman Jr had two touchdown runs as the Giants improved to 3-7 under first-year coach Joe Judge with a second straight win.

Matt Prater kicked a 59-yard field goal as time expired to give the Detroit Lions a 30-27 victory at Washington.

Detroit got the ball back with just 16 seconds left, but a roughing the passer call cost the hosts as it gifted the Lions 15 yards, allowing Matthew Stafford to complete a nine-yard pass to put them within range.

Washington had trailed 24-3 in the third quarter only for three straight touchdowns to drag them back into the game.

Aaron Rodgers threw two touchdown passes and ran for a third as the Green Bay Packers (7-2) beat the Jacksonville Jaguars (1-8) 24-20.

The Cleveland Browns’ Nick Chubb returned from injury to score a touchdown early in the fourth quarter – recording 100 yards rushing – for a 10-3 win over the Houston Texans.