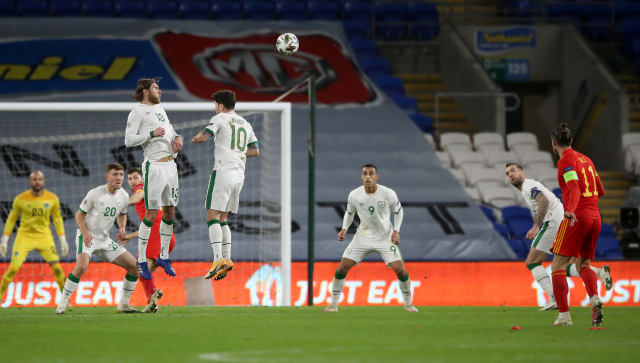 Gareth Bale stepped back onto the international stage as Wales moved a step closer to Nations League promotion with a 1-0 win against the Republic of Ireland.

The 31-year-old Real Madrid star, who sealed a loan move back to former club Tottenham in September, missed last month’s round of international fixtures as he continued his recovery from a knee injury.

However, he is back among the fold for the clashes with Ireland and Finland, which will determine the destiny of his country’s Nations League campaign.

Here, the PA news agency takes a look at how he fared.

Ryan Giggs’ deputy Robert Page initially opted for a 3-4-3 formation and chose to leave Cardiff striker Kieffer Moore on the bench. Bale was asked to line up on the right side of an attacking trio in which Daniel James occupied the left-sided berth, with David Brooks in the middle, but at times floated into a more central role.

Bale eased himself into the game, spraying a series of cross-field passes out to Rhys Norrington-Davies on the left and clipping an inviting ball over the top for James to chase. He went close with a viciously-dipping 35-yard free-kick which kissed Darren Randolph’s crossbar, and although he might have done better four minutes into the second half after being picked out inside the box by Ben Davies, he was in the right place at the right time to set up Brooks with a headed assist to win it.

Clearly not yet back up to full pace, Bale showed flashes of the talent which has made him a talisman for his country and got a first 90 minutes under his belt since September. He grew into the game as it opened up, and although this was perhaps one of his quieter evenings in a red shirt, his presence on the pitch alone is cause for optimism with the rescheduled Euro 2020 finals looming large.