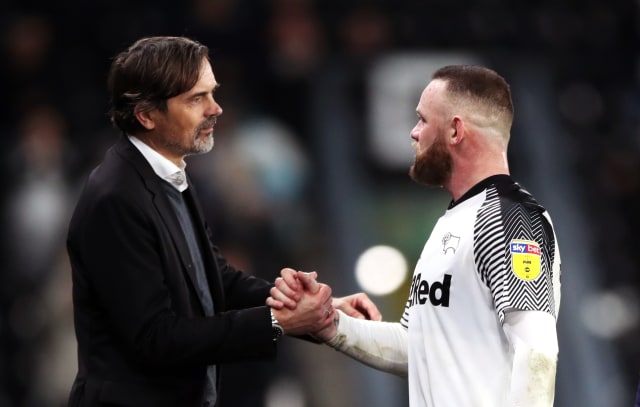 Wayne Rooney will help Derby prepare for their next Sky Bet Championship fixture after the international break following the departure of manager Phillip Cocu.

Dutchman Cocu took over as Rams boss during the summer of 2019, when Frank Lampard had left for Chelsea.

However, Derby have managed just six points this season, and sit bottom of the table.

Following confirmation of Cocu’s departure by mutual consent, former England captain Rooney revealed he had been asked to help the squad prepare for the trip to Bristol City on November 21.

Former Everton and Manchester United forward Rooney joined the Rams during the January transfer window as the 35-year-old looked to take his first steps into coaching while also continuing his playing career.

“I am sorry that Phillip and his staff have left the club and want to thank him personally for all his help and encouragement as part of his coaching staff,” Rooney said in a statement released to the PA news agency.

“The most important thing now is to stabilise the club and start moving up the table. I have been asked to be part of the coaching staff to help the team’s preparations for next Saturday’s vital match against Bristol City.

“The coaches and I will speak with the players on Monday.”

Derby thanked Cocu for his contribution to the club, on and off the pitch.

“Phillip and his staff helped develop and establish a considerable number of academy players in to the first-team squad and Phillip made significant financial contributions and personal efforts towards the club’s community projects during the Covid-19 pandemic, which the club are extremely grateful for,” a statement on the club’s official website read.

“Derby County wishes to thank Phillip, Chris and Twan for their hard work and dedication over the last 16 months and wish them every success in their future careers.

“The club will provide further updates when appropriate and will be making no further comment in the meantime.”

Earlier in November, Derby confirmed a deal had been agreed “in principle” for the sale of the club to Derventio Holdings, which is owned by Sheikh Khaled Zayed Bin Saquer Zayed Al Nayhan, a member of the Abu Dhabi Royal Family.

Sheikh Khaled is the cousin of Manchester City owner Sheikh Mansour Bin Zayed Al Nahyan, and the deal to buy Derby is reported to be in the region of £60million.

Former PSV boss Cocu, meanwhile, said it had been agreed it was “in the best interests of all parties” for him to leave the club.

In a statement on Instagram, the former Barcelona midfielder said: “I would like to take this opportunity to thank everyone at the club including the board, staff and all of the players for their fantastic support for me since arriving at Pride Park.

“Although this season has not gone as we all would have liked so far on the pitch, I believe passionately in the project that we started to build and I have no doubt that the future is bright for the club.

“I wish everyone associated with the club the very best both on and off the pitch, particularly with the ‘Stay Safe, Stay Fit, Stay Connected’ project that I am very proud of to have initiated.

“Finally, I’d like to say a huge thank you to the most important people of the club, the fans.

“Thank you for welcoming me to your club and for all of the support you’ve shown to me and the team. I wish you all the very best.”