The major talking points ahead of Scotland’s trip to Slovakia 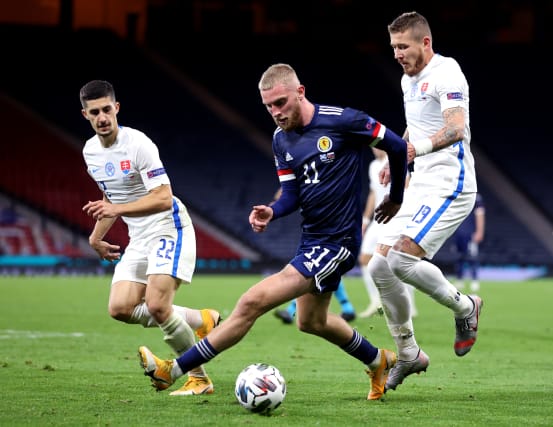 Scotland face Slovakia in Trnava on Sunday in the UEFA Nations League.

The Scots sit top of Group B2 and victory for Steve Clarke’s side will ensure promotion to the top tier.

Here are the talking points ahead of Sunday’s game.

Back down to earth

Both teams qualified for Euro 2020 on Thursday after 120 minutes of action away from home, Slovakia beating Northern Ireland 2-1 while Scotland came through their penalty shoot-out in Serbia. Both teams celebrated in the aftermath and will likely be much-changed for Sunday’s game.

One effect of the pandemic is that the World Cup qualification process effectively began for Scotland before they sealed their Euro 2020 spot. Victory in Trnava will seal top place in Nations League Group B2 ahead of Wednesday’s final game in Israel. Not only could that offer them a potential alternative route to the World Cup finals in 2022 but also promotion to the top tier and an enhanced chance of getting to the Euro 2024 play-offs if needed.

Scotland boss Steve Clarke has admitted he will make changes following Thursday’s exertions with Andy Robertson the most doubtful of his fitness concerns. One definite change will be upfront as Lyndon Dykes is suspended. Oli McBurnie is likely to get the chance to break his international duck after netting in the shoot-out in Belgrade.

Change at the helm

Slovakia are under new management since losing 1-0 at Hampden last month. Pavel Hapal had led Slovakia to the Euro 2020 play-off finals days earlier but defeat in Glasgow followed by a 3-2 loss against Israel prompted the Slovakian football authorities to make a change. Stefan Tarkovic, previously an assistant at Euro 2016, subsequently led the team to victory in Belfast and Slovakia will hope the new manager bounce continues.