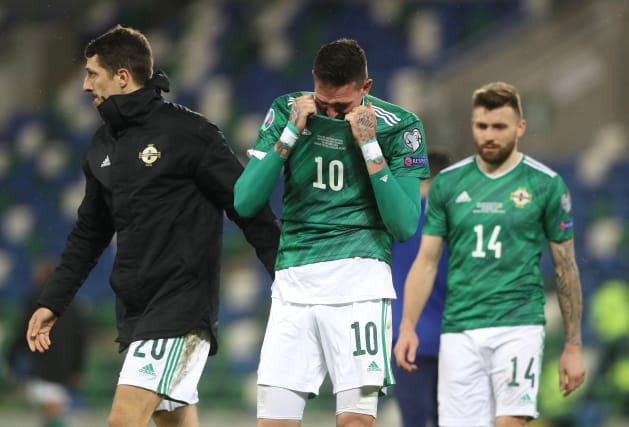 The relentless scheduled of football this season will afford Northern Ireland little time to get over the disappointment of missing out on Euro 2020.

Less than 72 hours after the final whistle blew in the 2-1 extra-time play-off defeat to Slovakia in Belfast, they will kick off against Austria in Vienna in the Nations League.

Here the PA news agency looks at the talking points ahead of the match.

Picking themselves off the floor

The mood inside the Northern Ireland team hotel on Friday morning was, as they say, lower than a snake’s belly. The colossal disappointment of missing out on a place at Euro 2020, particularly in the cruel manner of Thursday’s extra-time defeat to Slovakia at Windsor Park, is one that Ian Baraclough admitted will stick with the entire team for some time. With only days to prepare for Austria, the players’ ability to refocus so soon will be tested.

Northern Ireland’s struggles in the Nations League are well documented. Now deep into their second campaign, they have still only taken a single point from their eight games to date. Against that background, few will back Northern Ireland in an away trip to face the Group B1 leaders – a side that won 1-0 in Belfast last month. In the first running of this competition, Northern Ireland avoided relegation to League C only thanks to a change in format before it returned this year. As they sit three points adrift of safety in their group with two games to play, time is running out to avoid the fate this time around.

Northern Ireland are yet to score more than a single goal in any one game under Baraclough, with their only win under the 49-year-old coming in the penalty shoot-out against Bosnia and Herzegovina in the play-off semi-final. Addressing that looks to be a paramount concern. Conor Washington has earned a regular starting place off the back of his form with Charlton but has been unable to replicate it at international level so far, but the pairing of Kyle Lafferty and Liam Boyce looked lively when introduced in the second half against Slovakia. Baraclough needs to find a spark from somewhere.

The toll extracted by Thursday’s defeat was not purely mental. Craig Cathcart and Paddy McNair hobbled off in extra-time, while Stuart Dallas played most of the match suffering with an elbow injury sustained in the first half – determined not to come off. Baraclough said after the match that “five or six” players had problems that needed to be assessed. With Romania at home to come on Wednesday, Baraclough must decide how to use his squad.

Baraclough insisted after Thursday’s match that the defeat did not need to be the end of an era for Northern Ireland. He backed the likes of Steven Davis, 35, Lafferty and Niall McGinn, both 33, and the 32-year-old Jonny Evans, to keep going through the World Cup qualifying campaign to come, but none of the players have yet spoken about their own intentions. Sunday’s match may give them an opportunity to answer the questions themselves.