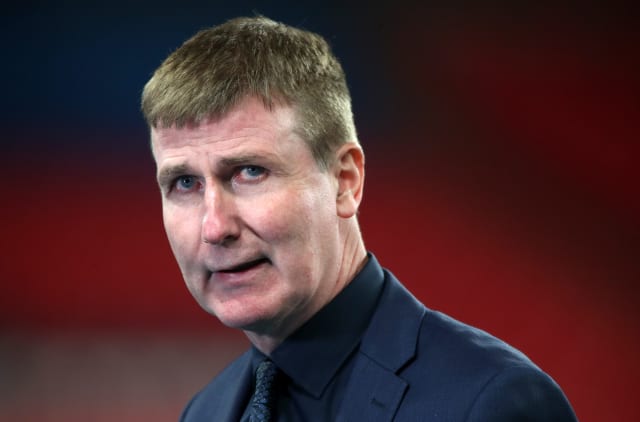 Stephen Kenny has insisted there is nothing wrong with the mentality of his Republic of Ireland players as they attempt to end a nine-game winless run in Wales.

Ireland last tasted victory when they beat Bulgaria 3-1 in a friendly in September last year under previous boss Mick McCarthy and Kenny, who has been in charge for six matches, has seen his team fail to score in the last five culminating in Thursday night’s comprehensive 3-0 defeat by England.

However, as he prepares to send a squad weakened by injury and positive coronavirus tests into Nations League battle with Wales in Cardiff on Sunday, the current manager has no doubts about the men to whom he will hand the shirts.

“Listen, there’s nothing wrong with the mentality of the players in the Irish squad, that’s for sure,” Kenny said.

“We’ve a lot of key players missing from the squad, but nevertheless, the players that we have called up, they dream of representing their country as young boys, growing up, to play for Ireland is the ultimate ambition.

“We’ve 25 players in the squad now, all good players and we’re ready to play the two games against Wales and Bulgaria.

“They all give everything of themselves all the time.”

Having lost Callum Robinson and Alan Browne after both tested positive for Covid-19, Kenny has also had to send Seamus Coleman and John Egan back to their clubs injured, while James McCarthy has been released for family reasons, prompting the manager to draft in defenders Ciaran Clark and Darragh Lenihan and midfielders Jason Knight and Josh Cullen.

He will hope whatever team he puts out at the Cardiff City Stadium fares better than the one which took the field at Wembley on a night when Ireland wilted against Gareth Southgate’s Euro 2020-bound side.

Defender Matt Doherty admitted in the immediate aftermath of that game that he was “embarrassed” by the result and accused his team of giving up, but Kenny had no issue with his comments.

He said: “I’ve listened to what he said and what he said was perfectly fine. He said he was embarrassed to lose the game 3-0, and that’s fine.”

Still awaiting his first win, Kenny will hope it arrives against either Wales or Bulgaria on Wednesday evening with the Nations League and World Cup seeding points always taking priority over the trip to London.

Asked whether he had been able to enjoy what has proved to be an eventful start to his tenure, he said: “Whether I enjoy the job or not is not the priority at the moment, trying to make the team successful is more of a priority.