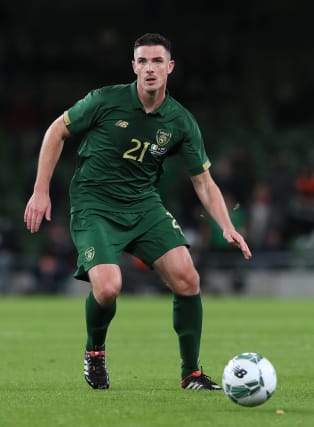 Republic of Ireland manager Stephen Kenny has called for reinforcements after losing Seamus Coleman, John Egan and Harry Arter to injury ahead of Sunday’s Nations League trip to Wales.

Everton full-back Coleman and Nottingham Forest midfielder Arter missed Thursday night’s 3-0 friendly defeat by England with hamstring and calf problems respectively, while Sheffield United defender Egan lasted just 14 minutes at Wembley after suffering a blow to the head in a collision with team-mate Conor Hourihane, and all three have returned to their clubs.

Newcastle defender Ciaran Clark and Blackburn counterpart Darragh Lenihan and Derby’s Jason Knight and fellow midfielder Josh Cullen, of Anderlecht, as well as Jack Byrne and Ryan Manning, who were due to meet up ahead of the Nations League fixtures against Wales and Bulgaria, have been called to bolster a squad which has also lost Callum Robinson and Alan Browne to positive coronavirus tests.

A Football Association of Ireland statement read: “Republic of Ireland manager Stephen Kenny has called in four players to the squad to face Wales in Cardiff in the UEFA Nations League.

“Midfield duo Jason Knight and Josh Cullen have linked up with the squad as well as defenders Darragh Lenihan and Ciaran Clark ahead of the UEFA Nations League match against Wales on Sunday, November 15, with kick-off at 5pm.

“Shamrock Rovers midfielder Jack Byrne and Swansea City’s Ryan Manning have also linked up with the squad ahead of training at the Cardiff City Stadium later this evening.

“Seamus Coleman, John Egan and Harry Arter have returned to their clubs.”

Striker Aaron Connolly was ruled out of all three games with a hamstring injury earlier this week, while James McCarthy was not involved against England for family reasons.