Past meetings between England and Belgium 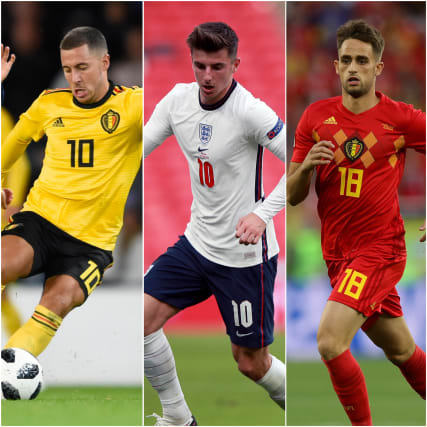 England travel to face Belgium in Leuven on Sunday in a Nations League clash which Three Lions boss Gareth Southgate has labelled a “must-win” game.

Defeat in the Group A2 fixture would end England’s hopes of reaching the finals of the competition next year.

Here, the PA news agency takes a look at some of the previous encounters between the two teams.

After flopping at their first World Cup appearance four years earlier, Walter Winterbottom’s side started their 1954 World Cup campaign by taking on Belgium in Basel.

It was an entertaining encounter which did not go the way heavy-favourites England would have hoped as they fell behind in the opening minutes before an Ivor Broadis brace and a Nat Lofthouse effort saw them claw back the score to 3-3 at full-time.

Group-stage matches at the 1954 finals would go to extra-time in the hope of finding a winner but, despite Lofthouse striking again, a Jimmy Dickinson own goal saw Belgium draw level as the match ended all-square even after the added period.

England would go on to be knocked out in the quarter-final stage by holders Uruguay.

Having finished top of their group at the 1990 World Cup despite taking just four points from their three games, England would again come up against the Red Devils.

Their last-16 clash in Bologna would be settled by one of England’s most memorable World Cup moments.

Bobby Robson’s side were being held to a draw as the game went into extra-time and, with one minute remaining, Paul Gascoigne played a free-kick into the Belgian box for David Platt to strike a sublime volley and settle the tie.

The Three Lions would return home from Italy after losing a semi-final penalty shoot-out to West Germany and suffering defeat to the hosts in the third-placed play-off.

Another World Cup meeting came when the two nations were paired in Group G – although both had already assured themselves of progression to the knockout stages when they faced off in Kaliningrad.

England boss Gareth Southgate and Belgium counterpart Roberto Martinez would make plenty of changes to their respective line-ups with more than one eye on their knockout fixtures.

The game would determine who would go through as group winners, however, and that honour would be Belgium’s as former Manchester United winger Adnan Januzaj scored the only goal of the game.

Both sides would progress through the competition before losing their semi-finals, England beaten by Croatia after extra-time and Belgium falling to eventual winners France.

Those defeats meant the pair would meet for the second time at the 2018 World Cup – this time in the third-place play-off.

Again, it would be Belgium who took the spoils with a comfortable 2-0 victory in Saint Petersburg.

Thomas Meunier opened the scoring in just the fourth minute before Eden Hazard – then of Chelsea – latched onto a typically-perfect Kevin De Bruyne pass to finish the game off in the latter stages.

The previous fixture between the two sides came a little over a month ago in the reverse Nations League game at Wembley.

Romelu Lukaku continued a fine goalscoring run by putting the visitors ahead from the penalty spot after being fouled by Eric Dier.

But Southgate’s men would rally and, aided by De Bruyne being forced off through injury, turned the game around as Marcus Rashford levelled with his own spot-kick before a deflected Mason Mount strike saw England secure the points.