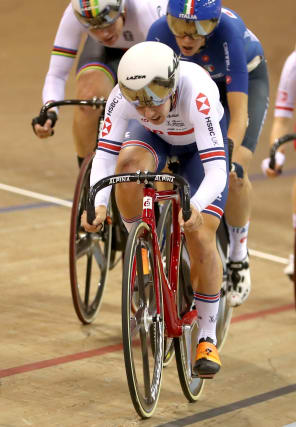 Great Britain’s Neah Evans and Matt Walls each secured their second gold medal of this year’s European Track Cycling Championships on Friday, while there was also a silver for Laura Kenny.

Walls added to his elimination race triumph on Wednesday by taking victory in the men’s omnium by 12 points.

Kenny – another of the victorious team pursuit riders – finished second in the women’s omnium, nine points behind Elisa Balsamo of Italy.

“It’s been a busy week; it’s been a bit bizarre as effectively we’ve had a summer of no racing and then to come to the European track champs where it’s just been non-stop. It’s been great to get back racing, and to get some really good results is just amazing.”

Walls said: “It was a tough race, it’s been a long day. I managed to come into the final points race with a bit of a lead (four points), I was able to hold that lead and ended up with another win.

“I’m really happy to come away with a second jersey. I’ve got the Madison on Sunday so I’m looking forward to that and hopefully I can make it a third.”

Saturday’s action in Bulgaria will see British riders competing in the women’s keirin and the men’s and women’s points races.