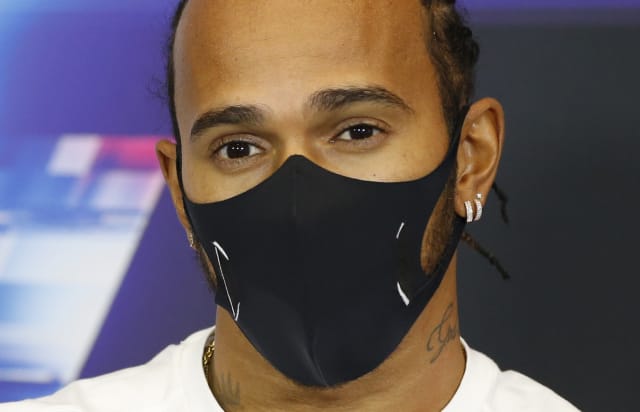 Lewis Hamilton has condemned the venue where he is bidding to win a record-equalling world championship as “terrifying” and “s*** with a capital s”.

Hamilton will continue to rewrite the sport’s record books if he emulates Michael Schumacher by winning his seventh title at the Turkish Grand Prix.

History awaits for the Briton if he finishes ahead of Mercedes team-mate Valtteri Bottas on Sunday.

Hamilton has triumphed nine times from 13 appearances in this most one-sided of campaigns. But he finished only fourth in practice at a circuit 30 miles outside of Istanbul, and one being used by the sport for the first time since 2011.

The fast-flowing 3.34-mile track was recently resurfaced ahead of Formula One’s return.

However, Hamilton was deeply critical as drivers scrambled for grip in practice on Friday. Rain forecast for Saturday evening could also cause further problems for Sunday’s race.

“It was a disaster today,” said Hamilton after he finished almost three tenths behind Bottas and 0.850 seconds adrift of Max Verstappen, the Dutchman who was fastest in both sessions for Red Bull.

“This track is such a fantastic circuit and I don’t fully understand why they have spent millions to resurface it. They could have just cleaned it and not wasted the money.

“It is terrifying the whole way round because it is almost like there are wet patches all over it. The tyres are not working so you don’t get the enjoyment of a lap you normally would here and I don’t see that changing.

“The surface is super-smooth, and shiny and the oil seeps through from the tarmac. It is s*** with a capital s.”

Circuit officials chose to resurface the track after they were given the nod by Formula One bosses to host the 14th round of this Covid-disturbed campaign in August.

Hamilton watched much of a curious opening session unfold from the comfort of his Mercedes garage as his competitors edged their way round the slippery surface.

Although conditions slowly improved as the asphalt was rubbered in, the Briton continued to bemoan the lack of grip.

While Hamilton will hardly be pushing the panic button on Friday evening, he will be determined to wrap up the championship in style.

Eighty-five points ahead of Bottas with just 104 remaining, Hamilton knows a victory here would see him take his sixth title in seven remarkable years.

How different it might have been for Hamilton, but for a meeting with former Mercedes team principal Ross Brawn at his mother Carmen’s house eight years ago.

It was there, in Knebworth, Hertfordshire, where he was sold the dream. Niki Lauda, the team’s non-executive chairman who died last year, was the first to approach Hamilton about a move from his boyhood team McLaren.

“I was at home in Monaco and I spoke to Niki and he said ‘you have to come to this team’ – but I wasn’t convinced,” explained Hamilton, 35.

“The convincing stage which made me look into it more was when Ross came round my mum’s house and sat with me in the kitchen.

“We had tea and he showed me the plans, the in-depth insight and the changes Mercedes were trying to implement. That was the selling point.”

Hamilton has just six weeks remaining on his current £40million-a-year Mercedes deal, but his boss Toto Wolff expects an extension will be resolved after his star driver has secured the championship.

Mercedes team principal Wolff said: “It was important to make sure we have both titles secured and then take a more relaxed approach to the discussions about the future.

“Do I feel cornered? No, not at all. We depend on each other. We want him in the car and he wants to drive for Mercedes so there is a good balance.”