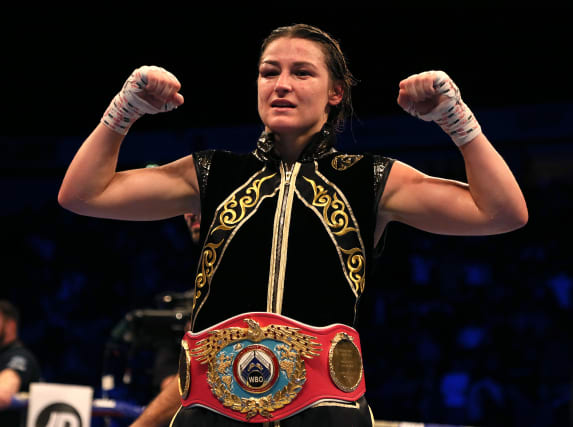 Eight years after her famous Olympic win over Natasha Jonas that sparked a women’s boxing revolution in the UK and Ireland, Katie Taylor is preparing to make more history in the sport on Saturday night.

Taylor puts her undisputed world lightweight titles on the line against Spaniard Miriam Gutierrez as the headline act on a show headlined by three women’s world title fights, something considered unimaginable prior to London 2012.

Taylor’s triumph over Jonas set new decibel records at London’s ExCel and it is a mark of how far women’s boxing has progressed that talk of a professional rematch between the pair raises the very real prospect of a post-Covid stadium-filler.

Taylor said: “I think it would make a fantastic fight. She showed in her last fight that she’s still capable of producing great performances, she is at that level and it is a fight that people would be very, very interested in.

“If it’s a fight that people want to see then I’m very happy to take that fight, and I’m sure she would be too. That is a mega, mega fight really, so I would be very interested in that.”

Jonas fought a particularly creditable draw against Terri Harper in her last fight in August and responded on Twitter: “Where we doing this Croke Park or Anfield? (Crowds permitting of course). Haven’t turned down a challenge yet, I’m ready when u are old pal!”

For the time being Taylor is not looking beyond the unbeaten Gutierrez on a show that also features Harper’s defence of her WBC super-featherweight title against Katharina Thanderz, and Rachel Ball against Jorgelina Guanini for the vacant WBA bantamweight title.

The Ireland 34-year-old has often spoken of her desire to leave a lasting legacy for women’s boxing and she believes the sport is now in better shape than ever, almost a decade after the first generation of female Olympic boxers broke down boundaries.

Taylor added: “We are in this sport to inspire the next generation and to leave a legacy, and I think all the fighters in the world right now are making all the noise, which is incredible.

“If you walked around the UK right now and asked people their favourite fighters they might say Terri Harper or Savannah Marshall, and that is absolutely incredible, that so many female fighters are household names.”

Taylor says she has no plans to retire with Jonas just one of a host of potentially significant names against whom she can strengthen her position as one of the finest female fighters of all time.

“I feel people haven’t see the best of me yet,” admitted Taylor, who was not at her best when she extended her unbeaten record to 16 fights with a points win over Delfine Persoon in her last fight in August. “Hopefully people will see the best of me in fights to come.”