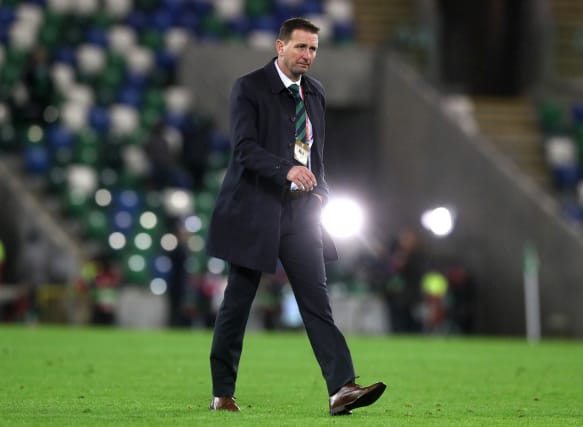 Northern Ireland manager Ian Baraclough admitted it will take a long time to get over the disappointment of missing out on a place at Euro 2020.

Hopes of reaching a second consecutive European Championships were dashed in a 2-1 extra-time defeat to Slovakia in Thursday’s qualifying play-off final, a night when luck rarely seemed to be on the side of Baraclough’s men.

Both of Slovakia’s goals – Juraj Kucka’s 17th-minute opener and Michal Duris’ decisive 110th-minute strike – had an element of fortune to them, and though an 88th-minute Milan Skriniar own goal extended the match, Northern Ireland were left to rue a Kyle Lafferty shot that struck the post.

“It’s going to hurt for quite some time,” said Baraclough, appointed in June to try to finish the qualifying campaign started under Michael O’Neill.

“I’ve said to the lads, there’s absolutely nothing they can be criticised about, they can walk out of here with heads held high.

“They gave absolutely everything: the rub of the green, the drop of the ball, it probably fell (Slovakia’s) way more often than not.

“It’s tough to speak in the dressing room when it’s so quiet, so desolate. It’s the worst I’ve felt coming in from a game having lost.”

Northern Ireland players slumped to the turf at the final whistle. Pain was etched on the face of Lafferty, who had played only a week after the sudden death of his sister Sonia, the 33-year-old having worn a t-shirt tribute to his “best friend” during the warm-ups.

George Saville started the match days after missing Middlesbrough’s draw at Brentford due to a family emergency, and with others playing through pain on the night, Baraclough praised the spirit of his players.

“We’ve rallied around (Kyle), George as well,” he said. “For those two boys to come in and focus like they did tells you so much about them as individuals and the group we’ve got around them.

After the match Baraclough was forced to deny defeat signalled the end of an era for a Northern Ireland side that reached Euro 2016 to end a 30-year wait for a major tournament and was then a whisker away from playing at the 2018 World Cup.

With captain Steven Davis now 35, Lafferty 33 and Jonny Evans 32, there are questions over whether this golden generation’s time is coming to an end, but Baraclough – still without a win in his six games in charge of Northern Ireland – only wants to look forward.

He has less than 72 hours to pick his players up for Sunday’s Nations League match away to Group B1 leaders Austria on Sunday night, but said attention must now turn to qualification for the 2022 World Cup.

“We want to get something from the two games, Austria away and Romania back here, to give ourselves something to look forward to for the next World Cup campaign,” he said.

“This will hurt for some time. The Euros will be played in the summer and we’ll be hurting watching them, but that’s how it is in sport.

“You have to pick yourselves up. This group has shown they are resilient time and time again and there’s no reason we can’t go into the World Cup campaign and put together a group of games to put ourselves in contention again.”