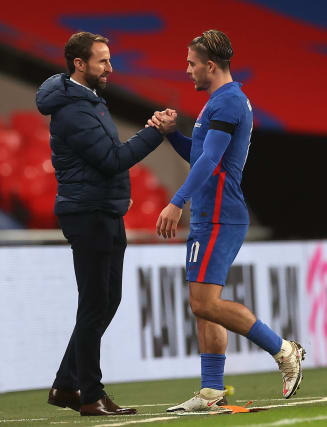 Gareth Southgate has hinted Jack Grealish could be in line for his first competitive England start as the Aston Villa captain was substituted after an hour of Thursday’s friendly win over the Republic of Ireland.

There has been a clamour for Grealish to be more involved with the Three Lions following a fine run of form at Villa and he impressed in the 3-0 victory at Wembley, setting up Jadon Sancho for the best goal of the night.

It was just a second England start for the 25-year-old, who could have opted to represent the Republic of Ireland having played for them at youth level.

Southgate’s side now face two crunch Nations League fixtures as a trip to Belgium on Sunday is followed by the last of their Group A2 games at home to Iceland three days later.

Grealish will be itching to be a part of those games and Southgate appeared to offer him hope of being included when asked why he had opted to take substitute both him and club-mate Tyrone Mings.

“The two boys both played Sunday as well and we have got an eye on the next two matches,” he replied.

“The managing of all the players and the load, we are so conscious of it, it is almost uppermost in your mind that you just wanted to get through the game without injuries as much as anything else which is a strange situation to be in really.

“We are very pleased with both of them so we didn’t take them off for performance reasons, that’s for sure.

“We were in a fortunate position tonight to be able to make changes at times that suited us physically.”

Grealish’s performance also caught the eye of former Ireland captain Roy Keane, who believes the player is already benefiting from life on the England scene.

“It was a cushy night for him. It was his second start, this guy is going onto great things, no doubt in my mind,” Keane told ITV.

“Jack has said his experience coming into the England squad, working with top players, you cannot beat it.

“You talk about coaching, I think sometimes you learn more from working with better players and we can see that, even from a couple of appearances he has had for England.”

Grealish’s chances of starting against Belgium were improved when the Football Association confirmed Marcus Rashford will miss the international break due to a shoulder injury.

Southgate had hoped to have the Manchester United forward available for the Nations League double-header and could now turn to Grealish instead.

Conor Coady will also miss the games after being told he needs to self-isolate after coming into close contact with someone who tested positive for Covid-19, with Southgate having to roll with more punches than ever.

“I think there is a different challenge for managers this season because things are changing so quickly,” he said.

“You prepare a team and then because of the virus you can lose players immediately and everything has to change.

“So many teams are experiencing that, there are obviously a lot more injuries in a really intense periods – the clubs didn’t have the summer break or a long pre-season, that is more complicated.”