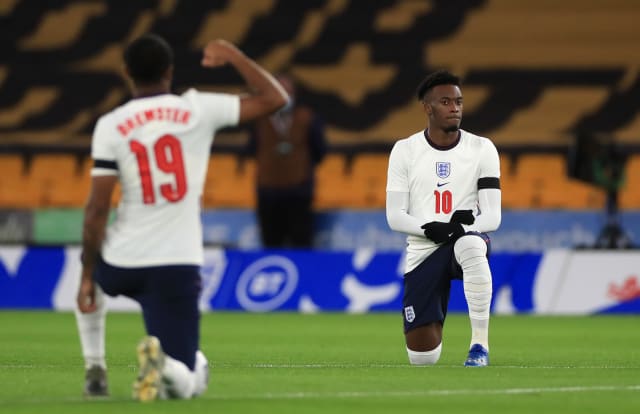 The 20-year-old scored a penalty to wrap up a 3-1 win at Molineux on Friday.

Curtis Jones and Ben Wilmot had put the hosts 2-1 up in the Young Lions’ first game since sealing their spot at Euro 2021 with two Group Three matches to spare.

Christian Garcia’s spot kick levelled for Andorra just before the break as they threatened to pull off another shock result after last month’s 3-3 draw.

Hudson-Odoi, who ruptured his Achilles last year, has three senior caps and was in Gareth Southgate’s Three Lions squad this time last year but Boothroyd has been pleased with his application after returning to his squad this term.

He said: “It’s tough because they burst on the scene, think they’ll be there forever but loss of form and injuries can happen.

“When he returned (in October 2019) he was red hot. Then he had a loss of form and lost his place in the (senior) team. The best players are the ones who have longevity.

“My experience of Callum is he’s been in a tough place and is coming out of it. He has just got on with it and has been really positive in the group.

“Everyone in our squad has to think if they can make the seniors next summer.”

Rhian Brewster hit the post before England opened the scoring when Liverpool’s Jones netted his first Under-21 goal, tapping in Hudson-Odoi’s cross from six yards.

Jonathan Panzo’s header was cleared off the line by Garcia and the visitors’ captain levelled from the spot in first-half injury time after Conor Gallagher brought down Eric Izquierdo.

Wilmot’s header three minutes after the break restored Young Lions’ lead and Hudson-Odoi’s penalty wrapped it up when Brewster was felled by Garcia.

Boothroyd added: “They are banana skins, a sticky team to play against. If you score a lot of goals then you should have done anyway and if you don’t win it’s a disaster.

“We started to play more their style than our own and it took a bit of getting hold of it. We should have been more clinical.

“I don’t think there was a bad performance, they were all very solid. Andorra made it difficult for us, they stopped the game with a few injuries and free kicks they were trying to win. Overall we stayed very cool.”